Round 13 of the 2012 AMA Pro Flat Track Pro Singles Championship saw the 'feeder' series of AMA Pro Flat Track head to the confines of the Illinois State Fairgrounds mile oval in what was to be another wild and exciting race for the Pro-level riders and class, running in conjunction with the Expert-ranked stars of The Rolling Thunder Show.

With just a couple of laps to go, riders head down the front straight in a pack that you could literally throw a blanket over, within inches of one another, and within inches of the start/finish line.  And all on a 450-based singles series motorcycle running at it's peak, with no room for error or any throttle left to get you out of harm's way, should and when it occurs.

In what has started to become a game of 'letting the pit bull play with the hand grenade' in the AMA Pro Singles Championship, the class showcased on the undercard of the National program has especially at the Springfield Mile become one of holding one's breath for a 12-lap main.  While the riders equipped with their potent 450 singles machines race so tightly-packed together for the length of the race that just one small mistake or mishap can cause mayhem that will ripple through the 18-rider field quicker then a brush fire in drought-stricken Kansas.

As a result of what has for the last couple of seasons, and especially after last year's ultra-close quarters at Springfield in the Pro Singles class, been a probable accident waiting to happen, the powers that be within AMA Pro Racing and the IMDA (the promoters of the Springfield rounds) had decided originally for this season that they were going to do away with the Pro Singles bikes on the mile oval, all for safety's sake mind you.  Not that the racing hasn't been good, nor has anyone been injured seriously, yet, but in the interests of making sure that a major accident or injury would not occur, and after lengthy discussion, have slated the Pro Singles on the mile to be a non-points paying event, and has been left open for those that DO want to race there, can still do so, but for cash payout only.

Although some will see this as a poor way to handle the possibilities of 'what could occur' the fact still remains that the 450s on the mile have been so closely grouped and tightly-wound that it was, or is, just a matter of time before someone pulled that pin on that hand grenade and let the pit bull loose in the fenced-in area.  And if that were to occur running at 120mph+ on a tightly-wound single-cylinder racing motorcycle, the affects could be devastating, and even fatal.

I don't have the answer any more then anyone else as to why only Springfield would or were to be affected in this move, as we all know Indy, Santa Rosa and Sacramento are also mile venues.  But for some reason the layouts of those tracks don't have the same 'grouping' effects that always occur at the Illinois State Fairgrounds venue when riders on the 450s are at speed.  Some may and will say that more injuries occurred during the Pro Singles last stop at the Peoria TT last year, and others may also recall losing Canadian rider Jesse Phibbs after his accident at the Indy Mile in August 2010, in which he suffered what would weeks later be fatal injuries, after his crash in one of the Pro Singles qualifying heats on the back stretch.

However, none of the other tracks on the schedule seem to have the propensity to 'bunch-up' the riders so closely in what is a VERY tight pack, and for what usually lasts for the length of the races on tap, and so far, other then a few wild re-starts and get-togethers, no one has of yet to suffer fatal or career-ending injuries.  In this respect, the powers that be, AMA Pro Racing and IMDA, have made a concerted effort to keep this from happening.  And bully for them!

But, the Pro-level riders DO still need to gain the expertise and experience on the big tracks so that one day, if they so wish, they can step-up to the Expert-level ranks and compete with the likes of Jake Johnson, Bryan Smith, Jared Mees and company on the fastest tracks in the nation.  And that is where AMA Pro Flat Track has now taken measures to introduce a new, Basic Twins Class, in hopes of helping those Pro-level riders to gain that level of experience, and especially on the mile tracks.

It was announced earlier today by the Daytona Motorsports Group in Daytona Beach, that starting with the Springfield Mile II on September 1, what is now scheduled to be round 12 of the 2013 AMA Pro Flat Track presented by J&P Cycles Grand National Championship season, the new Basic Twins Class will be introduced as a non-points paying event preview.  This new class is also a big step in helping the Pro riders attain familiarity with the power and speed differential compared to running the 450 singles at all of their events, and will morph into a full-time and points and cash-paying series for what is now the AMA Pro J&P Cycles Pro Singles Championship.

The shot above does a nice job of highlighting how closely-wound and tightly-packed the AMA Pro J&P Cycles Pro Singles Championship class runs on the mile track at Springfield, and even with this being within a handful of laps until the end, the entire 12-lap final has pretty much been a carbon copy of this type of action for the last several years.

Leading this pack is Dominic Colindres on the #66Y Weirbach Racing Honda CRF450R, followed by Wyatt Maguire on the #18M Kirland Racing Yamaha YZ450F, Michael Bickerton on the #28P Hogwrench Racing Honda, Zakk Palmer on the #81C Double Dick Bandits Honda, eventual winner Cody Johncox on the #96B Sunnyside Cycle Yamaha, Shayna Texter on the #25A DFW Honda (hidden, directly behind Palmer and just over Johncox' right shoulder), and Cole Anderson on the #21L Diesel Minnesota Honda.  With Johncox pulling out the win at the checkered flag, Palmer, Bickerton and Anderson would fill out the top-4, with Texter in the 6th-place spot, Maguire coming home in 8th and Colindres in the 9th-place spot.  Now that is some tight racing!

Check out the official press release below from AMA Pro Flat Track to get all of the details that have been released on the new Basic Twins Class, and I say bravo for taking the steps to get this done from the powers that be!


DAYTONA BEACH, Fla. (April 12, 2013) - AMA Pro Racing officials announced today a new class for AMA Pro Flat Track presented by J&P Cycles aimed at developing the up-and-coming riders in the J&P Cycles Pro Singles division.  The new class, titled Basic Twins, will provide a stepping stone for Pro licensed riders, allowing them to showcase their talents on twin-cylinder machines as they make the transition to the Grand National Championship.
"This is an important step in building up our young talent and creating a healthy environment for the future of the sport," said Dan Johnsen, Director of AMA Pro Flat Track.  "Allowing our Pro licensed riders to show their skills and talents, while gaining experience on the twins, eases their transition as they move through the ranks of AMA Pro Flat Track on their way to becoming the stars of tomorrow."
The new Basic Twins class is a re-envisioning of the Basic Expert Twins division that ran as part of the series during the 2007 and 2008 seasons.  The same engines approved for competition in the Grand National Expert Twins class will be eligible in the Basic Twins class, but with varying levels of modification required in order for them to fit within a reduced performance envelope. 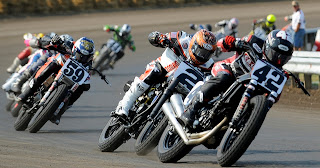