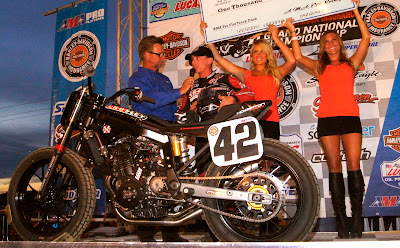 Round 10 of the 2012 AMA Pro Flat Track Grand National Championship season saw the stars of The Rolling Thunder Show sharing the stage in Indy with the 5th Annual Red Bull Indianapolis MotoGP Weekend, returning alongside the premier road racing series in the world after the cancelation to the schedule from the previous year due to the tragedy suffered at the Indiana State Fairgrounds during the Sugarland concert.

AMA Pro Racing's Barry Boone holds the mic for Bryan Smith after the Michigan resident had taken the #42 Crosley Radio/Howerton Motorsports powered by Eaken Racing Kawasaki 650R-based parallel twin to the win in the Dash for Cash early in the evening, while the lovely ladies representing AMA Pro Flat Track's best display the $1000 bonus check awarded to Flyin' Bryan for his popular win on the evening.

Earlier today, Boone was again officially announced to be returning to his official announcing duties with the Geico Motorcycle AMA Pro Road Racing Series for the 2013 season, and is also looking to fill his busy schedule with his open weekends also providing announcing duties for the AMA Pro Flat Track presented by J&P Cycles Grand National Championship Series.

This is another great announcement from the DMG-led Blue Crew as Barry does a wonderful job, alongside Scottie Duebler, of keeping the fans abreast of the action on the track during each event throughout the season.  This is one fan looking that much more forward to the full season ahead, and we shout-out a big 'congrats' to Barry and look forward to seeing him back at the track again this year, keeping us all entertained!

Check out the full press release below thanks to AMA Pro Road Racing!


DAYTONA BEACH, Fla. (April 8, 2013) - AMA Pro Racing is pleased to announce that Barry Boone will resume the role of Official Announcer for the 2013 GEICO Motorcycle AMA Pro Road Racing season. The one-of-a-kind voice will be treating fans to in-depth race coverage and insightful commentary throughout every event this year. This season will mark Boone's second full year of announcing at GEICO Motorcycle AMA Pro Road Racing events, and his fifth year of announcing for AMA Pro Flat Track presented by J&P Cycles.

Barry Boone is shown while performing his announcing duties at one of the 2012 Geico Motorcycle AMA Pro Road Racing events.  AMA Pro Road Racing photo by Corey J. Coulter.
"I couldn't be more excited to be back on board with GEICO Motorcycle AMA Pro Road Racing again in 2013," said Boone. "It's an honor to speak on behalf of AMA Pro and our great promoters. I'll continue to focus on entertaining the fans while delivering them the information they deserve at each event this season. We are the premier road racing series in America and I can't wait for our next event."
Boone has built a solid reputation for himself as a man with an innate ability to keep fans up to date with all of the on-track action, as well as the off-track drama. Listen for Boone's voice at GEICO Motorcycle AMA Pro Road Racing's next event, the Subway SuperBike Doubleheader at Road America, scheduled for May 31-June 2, 2013 in Elkhart Lake Wis.
Tickets for the Subway SuperBike Doubleheader at Road America start at just $20. For more information, please visit http://roadamerica.com/Races/RaceInformation.asp?id=240.
Posted by Stuman714 in Indy at 5:31 PM