Henry Wiles on the #17 Lloyd Brothers Motorsports Ducati 'L' twin leads Rob Pearson on the #27 Eaken/Roeder Racing H-D XR750 during one of the qualifying sessions at the Indy Mile during round 10 of the 2012 AMA Pro Flat Track Grand National Championship season on August 18.

The 2013 AMA Pro Flat Track presented by J&P Cycles Grand National Championship season was just extended to 15 events today, as AMA Pro Flat Track announced the addition of the Colonial Downs Mile to the schedule on August 24.  The track, primarily a horse racing facility, measures in at just over a mile and should make for some exciting racing for the east coast crowd.

With Wiles returning to the LBM team for the 2013 Twins Series schedule, and Pearson riding for the Weirbach Racing team this season (and debuting the team's new Kawasaki 650R Twins mount this year) the new event on the schedule should make a nice venue for the big bikes to get out and breath!

Thanks to AMA Pro Flat Track for the press release below, where you can check out the particulars on the event and see where to get your tickets for what will be round 12 of the 2013 AMA Pro Flat Track presented by J&P Cycles Grand National Championship season.

DAYTONA BEACH, Fla. (April 17, 2013) - Officials from AMA Pro Racing announced today the addition of Colonial Downs to the 2013 AMA Pro Flat Track presented by J&P Cycles schedule.  The circuit, which measures in at just over a mile, will feature the stars of the rolling thunder show on August 24, 2013 as Round 12 and brings the total number of mile races on the schedule to six.  The race will mark the first time in the storied history of the Grand National Championship that the series will visit Colonial Downs, located in New Kent, Virginia.

"We're thrilled to bring our series to the legendary Colonial Downs race track," said Dan Johnsen, Director of AMA Pro Flat Track.  "We are very proud to add a venue of this caliber to our schedule.  Our riders will now have one more opportunity to battle for position in the point standings and also allows us to showcase our magnificent sport to a new market hungry for flat track racing."
The AMA Pro Grand National Experts will roll out their twin-engine machines on the last Saturday of August as Colonial Downs is one of the largest dirt tracks in the United States, coming in at 1.25 miles.  The rising stars in the J&P Cycles Pro Singles will have their skills put to the ultimate test in late August aboard their 450cc machines, in a race which will surely come down to the wire. 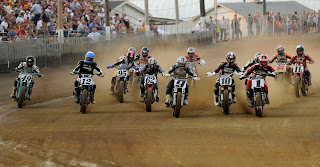