AMA Pro Flat Track: Matt Weidman Forced to Sit Out Next Few Rounds of 2013 Season Due to Injuries 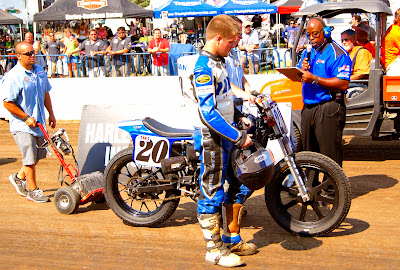 Matt Weidman and the #20 Greg Crow Racing/White's H-D/SNIP/Fiorio Investments-sponsored XR750 team are shown being introduced by AMA Pro Flat Track announcer Mylas Copeland during round 4 of the 2012 AMA Pro Flat Track Grand National Championship season at the Springfield Mile I on May 27.

Weidman, the 2008 AMA Pro Flat Track Rookie of the Year and the first-time winner at the Daytona Short Track II in March 2012, is being forced to sit out the next few rounds of the 2013 AMA Pro Flat Track presented by J&P Cycles Grand National Championship season due to injuries suffered from a crash at the Ocala, Florida track back on March 12, as well as some issues still hanging on from his Lima Half-Mile crash in June 2012.

Matt contacted me earlier today to let us all know what his situation is, and you can read his full release below as well as his message to Stu's Shots. 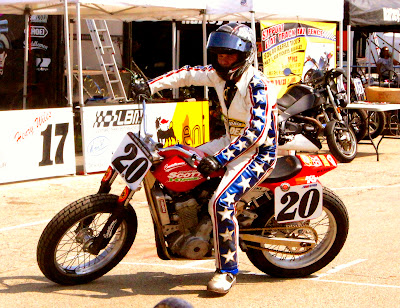 Matt is shown at the Springfield Mile II on September 16 as he heads out for his heat race on the #20 Scott Powersports/Saddlemen/Fiorio Investments/SNIP-sponsored Kawasaki, at round 13 of the 2012 AMA Pro Flat Track Grand National Championship season.

As most of you have known me for several years, you know that I have raced flat track since the age of 4 and turned pro at 16.  This is my 6th season as an Expert Pro and I have been in the top-10 every year.  I strive to always do my best in everything.  Most of you also know that I attend college online, working on my Bachelor's and then on for my Master's Degree in Accounting.  I also work full time.

I am sorry that this has taken so long since Daytona, but I have been having some problems and wanted to update all my great sponsors who have supported me for many years.  I crashed hard at Ocala on March 12th and suffered a concussion.  It is really hard to not race when you are even half-capable, especially after months of prep and spending money on race bikes and travel, so I decided to race Daytona.

I am probably one of the few racers that will tell you they Love the Daytona track, I always do good here and look forward to this track.  I wanted two more podiums this year, but walked away content with a 6th- and 7th-place finish, and I had to come from last place, both nights!

I am having residual effects from the concussion and saw a Sports Neurologist two weeks ago, he works with the Yankees, Pro Bull riders, boxers and other professional athletes.  My brain is fine, but needs to rest.

I am taking a couple months off, possibly more, and hope to return for Lima, which is my favorite track.  I will probably race a limited schedule this year.  Mike Scott, who is my Twins Series ride/sponsor, has been very understanding and will be ready when I am.  I have been very fortunate in 17 years of racing, to have only broken two bones, but have had several concussions.  I also had a severe upper respiratory infection after Daytona and after a couple weeks of antibiotics, was finally better. It has been a rough month, so I am sorry for the delay, but thanks to all of my great sponsors!


I also received this personal note from Matt today concerning his injuries:

"I wanted to let you know, you always give me great press.  The neurologist said I also suffered a small bleed in my brain last year at Lima, and I am guessing this is serious enough to take my time and heal.  I have some visual symptoms left and am going to see an eye doctor probably next week to make sure everything is okay and hopefully in a couple months that will clear up, too.

"This was the letter I sent to my sponsors, you can change it if you like.  I also put something on my Facebook page to my fans.  I will miss everyone at Springfield, you know what a race junky I am, and this is hard for me."


We really hate to hear this news about Matt, one of the nicest racers on the circuit as well as one of the most capable.

Having followed closely Matt's progression in The Rolling Thunder Show since his first AMA Pro Flat Track Grand National Championship podium at the Lima Half-Mile in June 2010, the New York State resident is one of the hardest chargers on the circuit, as well as one of the most well-rounded people around the sport.

With the support and backing from his Mom and Dad (Rachel and Guy) for years, last season was the first full season that they haven't been around to help support him at the track, after 'retiring' from full-time competition at the end of the 2011 season.  But their great upbringing is still there with Matt himself, every time he unloads and every time he talks to his friends and fans around the track.

After starting the 2012 season riding for the DFW Honda team in the Singles Series events (where he promptly went out and won his first-ever Grand National race at Daytona II), Matt also spent time riding for the GCR Racing team in the early part of the 2012 season in the Twins Series events.  Matt was riding for the GCR team when he set fast time at Lima in June '12, where minutes later in the closing session of qualifying he crashed heavily coming out of turn 2, ironically while riding his family-supported White's H-D XR750, that was all but totaled in the melee when Matt caught the outside fence and was pitched into the track end-over-end.

After suffering a shoulder and ankle injury, Matt returned later in the season to race for the Mike Scott/Scott Powersports Kawasaki 650R-based Twins Series team, starting with the Indy Mile on August 18.  Matt finished the season riding the bike that former rider Johnny Lewis had vacated after the Hagerstown Half-Mile round in early July, and ended the season ranked 10th in the overall points standings in the 2012 AMA Pro Flat Track Grand National Championship season.

Matt will be sorely missed at the track, but obviously right now the best thing to do is get healed up completely so he can get back to doing what he loves best.....racing.

We wish Matt a speedy and complete recovery and to let him know we're behind him all the way in knowing he'll return as soon as he can to throw another leg over a flat track bike in anger with the best again.  Get well man, thanks, and heal-up quickly!