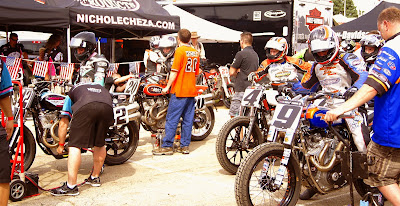 Round 6 of the 2011 AMA Pro Flat Track Grand National Championship season at the Springfield Mile I saw a handful of the top riders in the series, past, present and future ready to roll out for one of the practice sessions on May 29 for the first of two mile events to be held on the schedule for the new season.

Bryan Smith on the #42 Fasthog.com-sponsored XR750, Matt Weidman on the #20 White's H-D-backed XR, Chris Carr on the #4 American Motorcyclist Association-backed XR and Jared Mees on the #9 Rogers Lake Racing-sponsored XR get ready to put their talents, wrists and machinery to work in the early part of the day's program at the Illinois State Fairgrounds-hosted event.

Carr, who was in his final season of 'full-time' racing, is one of several former greats in The Rolling Thunder Show that will be returning to Springfield on May 26 to entertain the fans and help promote newly-announced Basic Twins Class for  the up-and-coming Pro-level riders.  2000 AMA Grand National Champion Joe Kopp and 3-Time AMA Grand National Champion Jay Springsteen will join the 7-Time Champ along with a handful of other veterans and greats of the sport in putting on a special exhibition race to be held as part of the day's program during the Memorial Day Weekend thriller.

The IMDA and RIDE Academy (owned and operated by former and current AMA Grand National greats Mike Hacker, Johnny Lewis and Kenny Coolbeth, Jr.) are banding together to put on this very special event in the hopes of showcasing the past greats of the sport, while the Expert-ranked contenders and the Pro-level riders do their job to showcase the present and future stars of the greatest racing show on two wheels in the world while competing in the day's regular portion of the program.

This is one event of any on the schedule, but especially one that is held at Springfield, that you won't want to miss.  Everyone knows you must have a ticket to see this great race, but with the day's action planned at Springfield on May 26, the seat you buy it for probably won't get much use throughout the day's events.

Thanks to AMA Pro Flat Track for the press release below which will help fill you in on more of the details, and another round of thanks goes out to the IMDA, who twice a season tirelessly put on a super event at Springfield, and also to the great group of guys at RIDE Academy for going to such great lengths in order to further promote and better the great sport that is the AMA Pro Flat Track presented by J&P Cycles Grand National Championship.  You guys rock!


DAYTONA BEACH, Fla. (April 12, 2013) - AMA Pro Flat Track presented by J&P Cycles will be bringing the series to Springfield, Ill. on May 26, 2013 for its first go-around of the Springfield Mile this year.  Along with the usual intense racing action, Ride Academy is set to host a "Race of Legends" during the event.
"The Springfield Mile is really shaping up to be another spectacular event and this is just one of the many projects that the IMDA has in the works," said Dan Johnsen, Director of AMA Pro Flat Track.  "The history of this sport is what makes it so great, and we know that our fans will appreciate this opportunity to see their favorite legends back on the track."
The race will include a select group of past Grand National Championship event winners who will be on hand to show their support for the Basic Twins class scheduled to return to the series.  Jay Springsteen, Joe Kopp, Rich King, Ronnie Jones, Steve Beattie, Steve Morehead, Mike Hacker and Chris Carr will all be in attendance and participating in the race. 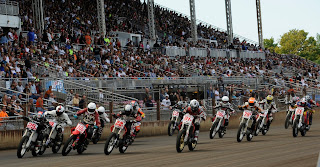