DAYTONA BEACH, Fla. (April 23, 2013) - CBS Sports Network and AMA Pro Racing, in conjunction with Chet Burks Productions, announced today a television agreement to showcase GEICO Motorcycle AMA Pro Road Racing as part of the Network's CBS Sports Spectacular series.  CBS Sports Network will air flag-to-flag race coverage of the premier National Guard SuperBike and GoPro Daytona SportBike classes through the 2014 season.  Programming begins Saturday, June 1 (2:30 p.m. ET) with a 30-minute preview show before live coverage of the Subway SuperBike Doubleheader at Road America in Elkhart Lake, Wis. (3:00 p.m. ET).
GEICO Motorcycle AMA Pro Road Racing telecasts are produced by Chet Burks Productions, long-time partner of AMA Pro Racing programs.  The initial telecasts will be presented in afternoon weekend time slots, with several events airing live.  In addition, encore broadcasts and an all-new 30-minute weekend preview show will air on CBS Sports Network.
Leading up to race weekends, the 30-minute preview shows will get fans up to speed with on-site coverage of qualifying sessions, highlights from previous rounds, as well as vignettes on the history of the sport and the technical aspects of motorcycle road racing. Hosted by a panel of industry experts, the show will provide insider insight on the latest paddock news, as well as interviews with riders and celebrity guests. 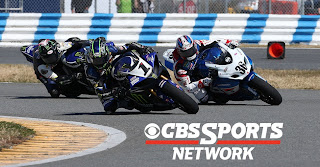 Josh Hayes #1, Martin Cardenas #36 and Josh Herrin #2 battle during one of the AMA Pro National Guard SuperBike Series events at Daytona in March during the season-opening round of the 2013 Geico Motorcycle AMA Pro Road Racing season.  AMA Pro Racing announced today a new television package with CBS Sports Network that will feature live coverage of the 2013-14 seasons.  The first event scheduled to be shown is round 2 of the season at Road America on June 1.  AMA Pro Road Racing photo by Brian J. Nelson.
"We're excited to add AMA Pro to our CBS Sports Spectacular lineup," said Dan Weinberg, Senior Vice President, Programming, CBS Sports Network. "GEICO Motorcycle AMA Pro Road Racing is a high octane, action-packed sport featuring some of the world's best motorcycle racers and is a great addition to our live programming this summer."
"We are incredibly proud of this television package and excited to begin our new relationship with CBS Sports Network," said David Atlas, Managing Board Member of AMA Pro Racing. "Through the live action and in-depth features, we will present fans with the most intense immersion into our unique and exciting racing that the sport has ever seen."
"This agreement is the result of a tremendous amount of time and commitment from AMA Pro and is a significant step for motorcycle racing in America," said Chet Burks, President of Chet Burks Productions. "We look forward to producing an exciting television experience for CBS Sports Network viewers."
CBS Sports Network is available across the country through local cable, video and telco providers and via satellite on DirecTV Channel 613 and Dish Network Channel 158. For more information, and to access the CBS Sports Network channel finder, go to www.cbssportsnetwork.com.
About GEICO Motorcycle AMA Pro Road Racing:
GEICO Motorcycle AMA Pro Road Racing is the premier motorcycle road racing series in North America.  Sanctioned by AMA Pro Racing, the Series is universally regarded as one of the most competitive road racing organizations in the world.  The 2013 schedule includes rounds on many of the country's finest road courses. For more information on GEICO Motorcycle AMA Pro Road Racing, please visit http://www.amaproracing.com/rr/.
About Chet Burks Productions:
Chet Burks Productions is a full service television production company with over 25 years of professional experience.  Our wide ranging expertise includes producing live sporting events, on-site remote productions, magazine shows, and in-house studio television productions.  Whether it's producing and directing championship motorcycle and car racing events or developing full scale commercials for a variety of industries, Chet Burks Productions skillfully manages all aspects of our clients' needs.