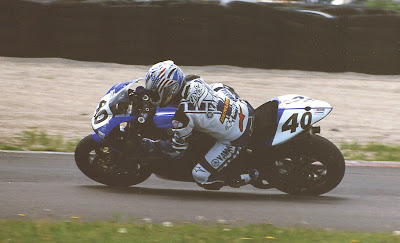 With tire problems plaguing the overall outcome and finish of the season opening AMA Road Racing Series, and the ensuing 2 hour 30 minute red flag that shortened the race from 200 miles to 147, this race will be remembered more for the problems associated with it than for it's wild and crazy finish. With several riders coming together and two crashing out just behind the #40 Latus Ducati as it was crossing the stripe to take the checkered flag after 14 wild and wooly laps, all hell broke loose on AND off the track after the melee was cleaned up and the riders involved miraculously walked away. Scoring officials were at odds initially as to who actually finished where, and when the dust and parts had settled, Cory West on the #57 Vesrah Suzuki GSX-R600 and former winner Jake Zemke on the #98 Project 1 Atlanta Yamaha YZF-R6 rounded out the box in victory circle after what was surely the longest day's journey into 'almost' night.

Here is the official story from the sanctioning body, AMA Pro Road Racing, on Saturday's Daytona 200:

And thanks again to AMA Pro Road Racing for these results of Saturday's endurance race:

Speed TV.com has this review video of the day's events at the Daytona '200':