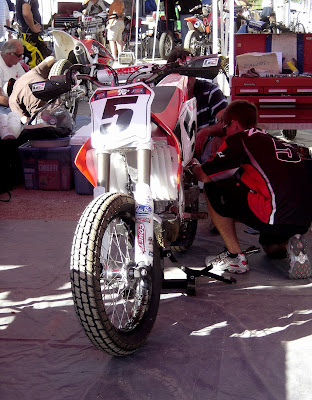 Jake Johnson's Zanotti Racing crew is hard at work on his #5 Zanotti Racing/Leo Vince/Tucker Rocky-sponsored CRF450 during a break in the racing action at the Springfield Short Track round of the 2010 AMA Pro Flat Track K&N Filters presented by Motorcycle Superstore.com Grand National Championship Series. Johnson would go on to take third later in the evening, and of course clinch the 2010 AMA Pro Flat Track Grand National Championship just over a month later at the year-end event in Prescott Valley.

Jersey Jake, who won round two at Daytona in March of 2010 on one of these machines, qualified fourth this afternoon behind fast qualifier Johnny Lewis #10, Sammy Halbert #7 and Henry Wiles #17. First full-year Expert Brad Baker qualified fifth on his #12 machine.

With K&N Filters bowing out of their support for The Rolling Thunder Show for the 2011 season after their great involvement in the sport for the 2010 season, it was announced this afternoon that Harley-Davidson Insurance would be taking over the title sponsorship reigns for this year, effective immediately with the opening round today on the Daytona Short Track at DIS. Instead of the K&N Filters header you see at the top of the number plate in this shot from 2010, 'Harley-Davidson Insurance' will now take it's place as the new header. And good news also comes in that H-D Insurance will ALSO UP THE YEAR-END PAYOUT for the points fund, doubling the purse for the year-end points fund to $100K.