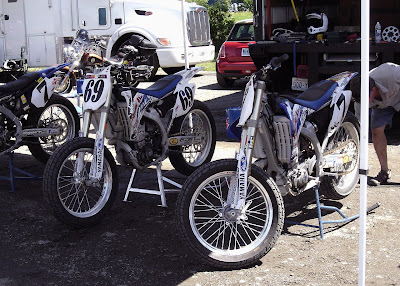 Sammy stole the show again last evening at round two of the 2011 AMA Pro Flat Track Harley-Davison Insurance Grand National Championship Series at the Daytona Short Track, passing the early leaders on lap four, and sailing to an over 5 second win on second place man Johnny Lewis on the #10 Scott Powersports Honda after 25 grueling laps on the limestone track. Third place on the evening went to first full-year Expert Brad Baker on the #12 Honda. Rounding out the top five were #1 Jake Johnson on the Zanotti Racing Honda and #2 Kenny Coolbeth, Jr. on the Chaplin Kawasaki.
Racing luck was a hard pill to swallow at the second Daytona round, as #3 Joe Kopp (after a brilliant ride to third earlier in the day on the DIS road course in the XR1200 Series), #42 Bryan Smith, last year's Calistoga winner #80 Steve Bonsey, and #15 Nicole Cheza failed to make the 48 rider cut-off for the evening's event. Slammin' Sammy stole the whole pie last night in setting fast time, winning the fastest heat of the evening, winning the Dash for Cash and romping to the main event win over an 18 rider main event field filled with some of the best The Rolling Thunder Show has to offer.

With a short five week break before the series resumes at the Southern Illinois Center in DuQuoin, IL. on April 16, teams will have a chance to regroup for the 2011 season in the AMA Pro Flat Track Harley-Davidson Insurance Grand National Championship Series.

Paul Carruthers was on hand again at DIS to file this report on the race for Cycle News.com:

Larry Lawrence filed this race press report on last night's action at Daytona on his The Rider Files.com site:

Bryan Harley was on hand for Motorcycle-USA.com to file this report on the race last night in Daytona:

The Daytona News-Journal had a reporter on site for this story of the evening's events at the Daytona Short Track:

Here's a sampling of Dave's photos from the AMA Pro Flat Track gallery from last night:

And the boys across the pond from the GREAT Sideburn Magazine filed this report on the race as well:

And big thanks go out again to the great Miriam Deitcher for her on-the-spot coverage of the action the last couple of days from the World Center of Speed in Daytona. Miriam used to cover all of the AMA Flat Track races for the AMA several years ago, and started up her own page here on Facebook to keep the fans at home up to date on the on and off track action: