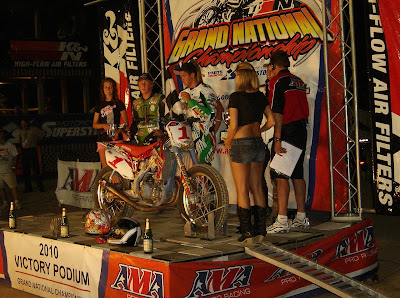 While 2nd place finisher Chaz Springsteen looks on and event winner Brad Baker takes a swig of water, 3rd place finisher Mikey Labelle is interviewed by AMA Flat Track race announcer Scottie Duebler on the victory podium for the AMA Pro Motorcycle Superstore Pro Singles main event at Lima, OH. in June of 2010. After 12 hard-fought laps, Bad Brad took a convincing win on the half mile of just over 3.4 seconds from Springsteen, who came home just .313 seconds ahead of Labelle, who likewise finished just .050 seconds ahead of 4th place finisher James Rispoli. Baker is sponsored on his #1 Honda CRF450 by Rod Lake/Mike Velasco/Brothers Powersports, and was the defending and inaugural '09 AMA Pro Singles Champion.
The Pro Singles Class was originally established during the 2009 season as a showcase and ladder class for the younger and/or less experienced riders in flat track to get track time in competitive environments and to hone their talents in hopes of moving up to the premier class in flat track, the AMA Grand National Champion Series. It has proven to be an ultra-competitive series, and with the riders showcasing their talent on single cylinder-based machines, the costs are somewhat kept in-check as opposed to running a competitive Twins-based machine. Some of the best racing at any given event, whether on a short track, TT, half mile or mile course, has been seen in the Pro Singles Championship Series and close racing and finishes are the norm at any given event.
While Baker has moved on and up to the AMA Flat Track Grand National Champion Expert division for the 2011 season, both Springsteen and Labelle will be competing again during the upcoming season in the Pro Singles Series. Springsteen wasn't in attendance at Daytona, and Labelle had a rough start to his season in finishing last in the first race and not qualifying for the main in the second earlier this month.
After finishing in the 5th spot in the 2010 Pro Singles standings, look for Labelle to improve steadily throughout the upcoming season. And with a 7th place finish in last year's standings to his credit, Chaz should have a good year in 2011 as well. With Baker and '10 Pro Singles Champ Jeffrey Carver, Jr. making the move to the Expert class for this year, look for someone to step up to fill the void left by the departure of these fine young men in representing the sport and showcasing the talent level in this feeder class.
-------------------------------------------------------------------------------------------------

With just over two weeks to go for round three in the 2011 AMA Pro Flat Track Grand National Championship Series and AMA Pro Singles Series, a little reflection on the first two years of the AMA Pro Singles Flat Track Championship Series is due. With both '09 Pro Singles Champ Brad Baker and '10 Champ Jeffrey Carver, Jr. making the move to the 'bigs' in the AMA Flat Track Grand National Championship Series, there is a wide-open range of riders coming up in the feeder series that could take over the top spots vacated by these fine young men. And with the level of competition seen in the first two years of the series, nothing less then the best should or will be expected as the season gets rolling full swing come late spring. Mikey Avila on his #33E Honda CRF450 is the front runner after the first two rounds at Daytona with 1/2 finishes to his credit in the openers. Gerit Callies on his #76L Honda also carded 2/1 finishes and looks to give Avila a run for his money in 2011. Who else do you expect to see step up in the 2011 season?

When AMA Pro Flat Track came up with the overall formula for the Pro Singles Championship Series to replace the Expert Twins Series for 2009 and beyond, the idea was to have a level playing field to showcase the talent of the up-and-comers on single cylinder-based machines, in order to draw the competition level closer together, and as much as possible under racing scenarios, lower the costs to go racing. Costs of maintaining a single cylinder machine should/could prove to be less then maintaining a twin cylinder machine, and also all major manufacturers produce a 450CC machine that can be set up as a flat tracker with 'minimal' work, to make a more level playing ground. Whether you can use words like 'lower costs' and 'minimal' in discussing racing in general is another subject all together, obviously, and not the aim of this discussion.

Three years into the running of the series now, Honda has without a doubt established itself as the 'machine of choice' in the Pro Singles Class with it's CRF450 machine. Two out of three riders entered in the class at Daytona were Honda mounted, and those numbers are also similar in the Expert Singles Class as well. With Henry Wiles' and Kawasaki's dominance in the Expert Singles Series the last couple of years, they have gained a few spots in terms of machines being entered by riders for 2011.

Mark Cernicky, who writes for Cycle World.com, put together a competitive Honda CRF450 for the Pro Singles Class in '10 and made the main at Prescott Valley for the season-ender back in October. He also did some racing near his home in California at Perris Speedway and managed to win some races along the way, too. Along the way, he put together a great story of putting his effort together. You can read about it here:

While you are waiting for round three of the 2011 AMA Pro Flat Track Grand National Championship Series and AMA Pro Singles Championship Series to kick off in a little over 17 days in DuQuoin, IL. on April 16, you can check out the rules packages here: