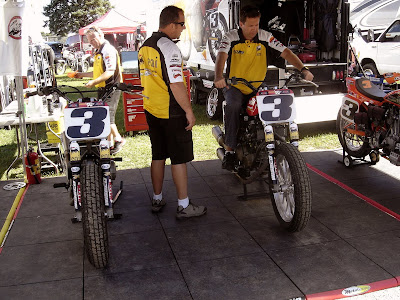 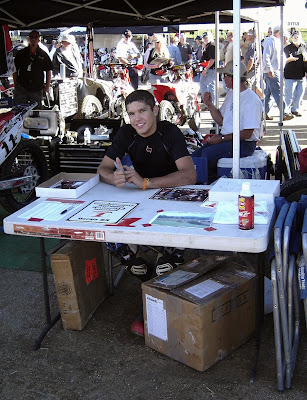 Having been conversing with team owner Dave Lloyd since the end of December of 2010 on his team's 2011 sponsorship search, I fired off an e-mail to him after reading that Brad had announced on Friday he would be competing in the '11 Twins Series events on the LBM Ducati. Dave and his brother Mike, long-time high profile competitors in The Rolling Thunder Show, have been working feverishly to get sponsorship together for this year, with high hopes of bringing the team back to the track for 2011. With last year's rider Joe Kopp announcing his retirement at the end of last season from full-time competition, and with the flat global economy still hitting everyone and everything in it's path (especially motorsports sponsorships) things weren't looking totally grim, but were nonetheless leaving them (and myself!) wondering if things would fall together in time for the series first Twins Series event (which is now going to be Memorial Day at the Springfield Mile, with the recent cancelation of the May Arizona Mile.)

Well, Stu's Shots can report to you that the great looking on-and-off the track Lloyd Brothers Motorsports Ducati team WILL be back for 2011. Dave was kind enough to fire back an e-mail confirming what I had heard/read, and is currently in the process of putting together official press releases (to be coming out in the next few days!) to announce this great pairing in The Rolling Thunder Show for the upcoming season. We should have all of the big (and little) details sometime in the next few days straight from one of LBM's owners, and we will have that official press release here on Stu's Shots for you as soon as we get it in our grubby little fingers.

A BIG congrats to Brad Baker and The Lloyd Brothers team for getting things together to make another great run at the AMA Pro Flat Track Grand National Championship Series. This is a team that brings an awful lot to the table in terms of exposure and bang-for-the-buck for it's sponsors and fans, and without them the series would surely suffer a massive hole in the paddock and on the track-figuratively and literally. We can't wait to see them hit the track together for the first event on the legendary Illinois State Fairgrounds mile oval at the end of May.

Stay tuned here as we will have all of the details posted once all of the particulars come together in the next couple of days.

Dave and Mike Lloyd put together this great video at the end of the 2010 AMA Pro Flat Track Grand National Championship Series season. Great stuff, and if nothing else it will help some until the end of May rolls around to get you geared up for the new season and this great news:

This is a fine example of great advertising and sponsorship exposure that the LBM team is famous for in The Rolling Thunder Show: