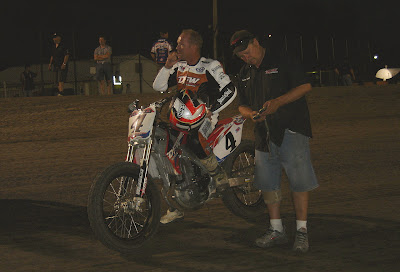 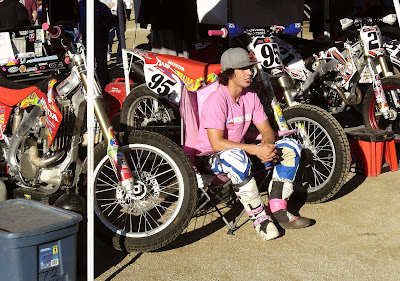 Rookie Expert J.D. Beach had a career weekend in winning 10 of the 12 events, with Carr and AMA Pro Flat Track Pro Singles competitor James Rispoli taking home the other wins on Saturday and Sunday. With Beach's first foray into 'The Bigs' riding in the Expert Class some five months ago at the Springfield rounds, and his off-season training including contesting some of the other Steve Nace rounds at DuQuoin, the youngster who now calls Kentucky home is more then proving he deserved to step into the Expert Class. And with Daytona just over two months away and round three in DuQuoin just over three months away, look for J.D. to have a great set-up and be ready for the upcoming season of racing in the AMA Flat Track Grand National Championship Series. And look for him to come out strong and smokin'!

Larry Lawrence was on hand all weekend for the Ethan Gillim Memorial events held at DuQuoin and as always he has some great stuff to show us from the weekend's festivities.

Here's the link to LL's pics from day one on his great site The Rider Files.com:

Larry also filed this report with Cycle News.com for day one at DuQuoin:

Dave Hoenig was on hand over the weekend as well and filed these results for day one over on his Flat Trak Fotos.com site (and within a few days should have more pics, too!):

Here's LL's report on day two at the Southern Illinois Center over on Cycle News.com:

And Larry has some more great pics from day two on Sunday at DuQuoin here at his The Rider Files.com site:

Steve Nace Racing has been taking care of the AMA series that used to go by the Hotshoe Series or the 600 Series for several years now. Here's the link to his site where you can also get other event results as they are posted. They run several events throughout the off-season in DuQuoin and then they will run what used to be called the 'regional' races throughout the course of the 'normal' racing season: