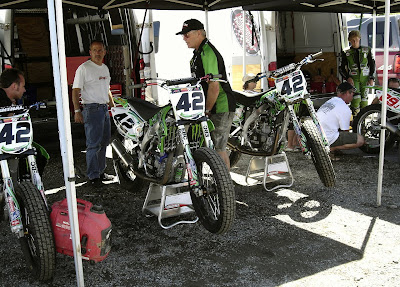 Bryan Smith, Barry Smith (Bryan's father) and Bill Werner discuss set ups on the #42 Werner Springsteen Monster Energy Kawasaki DTX450s in their pit area during a break in the on-track action at the Gas City Short Track round of the the AMA Pro Flat Track Grand National Championship Series in June of 2010. AMA Pro Singles rider and WSMEK team mate Chaz Springsteen can be seen on the far right side of the shot looking over his #29J machine in his pit area. Smith would miss the main event of the Expert Singles Series and Springsteen ended up finishing 13th in the Pro Singles final.
Flyin Bryan will have a new team mate on board for the 2011 season with JR Schnabel/National #33 joining the Bill Werner/Jay Springteen mantled team. This should be a big help in terms of development of the EX650R-based twin, which still won two races with Smith at the controls at Indy and the September running of the Springfield Mile. Having another rider on hand to share the set-up and testing for the team should prove to narrow that curve, and if so, the rest of the competition had better be looking over their shoulders once the season picks up full swing in Arizona come May.
But probably the area that the team most needs to concentrate now on would be the Singles program, and Smith has been doing some serious ice racing in Michigan during the off-season to help keep him in shape, as well as getting a leg up on the competition before the first green flag of the season flies at Daytona on March 10. In 2010 he struggled on the Singles bikes, with best finishes in the six round series of 6th at Daytona round two and 5th at the Springfield TT in May. Not qualifying for the main at Gas City was definitely the low point of the season on the 450, and shoring up this part of the program will put Smith and the #42 team right up at the head of the pack for contention for the 2011 AMA Pro Flat Track Grand National Championship and that coveted #1 plate.
Look for this to improve drastically for Bryan in 2011. You don't keep a member of the Michigan Mafia down for long, and if off-season training can and will make a difference, he's already a step ahead of just about everyone already!
-------------------------------------------------------------------------------------------------

Kawasaki Racing and Monster Energy have been doing a great job of rolling out news and videos to highlight the AMA Pro Flat Track Grand National Championship Series and the #42 Werner Springsteen Monster Energy Kawasaki team. After a great year in 2010, Bryan Smith is getting ready for the new season that kicks off at Daytona on March 10. During the off-season he has been teaming up with other Michigan Mafia members to do some ice racing on his KX450-based flat track machine on the frozen lakes in and around the Flint, MI. area, his home stomping ground.

With new team mate JR Schnabel coming on board the Werner Springsteen team for the 2011 season, this could prove to be the extra kick the team needs to step up in contention for the #1 plate in AMA Grand National Championship Racing. Development on the EX650R-based twin will now be shared between the #42 of Smith and the #33 of Schnabel, and everyone knows that JR has always had a great Singles Series program throughout the years, so that should prove to be an extra burst to Flyin Bryan as well. With his off-season training shown in the video below from Kawasaki Racing, this should prove to help him improve on his 2010 Singles Series finishes.

Thanks to Kawasaki Racing and Monster Energy for doing such a super job of highlighting The Rolling Thunder Show and the Werner Springsteen Monster Energy Kawasaki Flat Track Team!