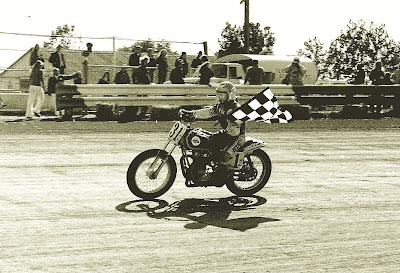 The flat track racing community has been hit especially hard this week with the passing of some of the greats of the sport. Late yesterday we got word that Rick Hocking, a Californian who started contesting the AMA Grand National Championship/Camel Pro Series as a Rookie Expert in 1974 (also my rookie year), had passed away.

Hocking, who I first saw race in the summer of 1974 when I was just a youth in high school, was one of the guys I remember around the track that always had that 'million dollar' smile. He also had the ability to drag the cases on a Yamaha parallel twin while going into turn one at the Terre Haute half mile that simply amazed me as a then-new devotay of AMA Flat Track Grand National Championship/Camel Pro Series competition. And his equipment was always top notch and clean as a pin when it rolled out of the van for the next event.

Larry Lawrence did a super job of putting this article together on Rick's life over at Cycle News.com. RIP Rick Hocking, and thanks for the great life story on Rick here, Larry!