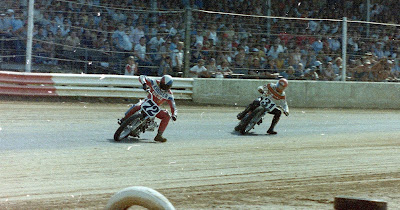 -------------------------------------------------------------------------------------------------
Mike Kidd on the #72 Kruger Racing XR750 leads Rex Beauchamp on the #31 Harley-Davidson Factory XR during main event action at the Terre Haute Action Track Half Mile on August 17, 1975, in what was one of the all-time classic battles in racing. Kidd, the former contender for Rookie of the Year, who came into the AMA Flat Track Grand National Championship Series with a loaded class of top-talent riders several years earlier (Kenny Roberts and Gary Scott also made their debut in the '72 season) would go on to pull away from Beauchamp later in the main to win his first main event since returning from injuries suffered in the '74 season. The rider who at one time had held the nickname of 'Mr. Hard Luck' would return on fire to the series, and would eventually win the elusive #1 plate, that had remained out of his grasp for what seemed like decades, at the end of the 1981 season.
After riding for teams that included the Triumph factory and the Harley-Davidson factory during his career, he also helped to develop Honda into a major powerhouse in the series. Probably one of his biggest accomplishments was bringing the U.S. Army into the sport in the late '70s as his primary sponsor. At that time, outside the industry sponsorship was very rare in AMA Flat Track, and to this day the U.S. Army still sponsors teams in Nascar and NHRA. Whether he was ever recognized for it or not, MK probably helped open the door (if not down right kicking it in) for many other outside the industry sponsors to show up in AMA Flat Track Grand National Championship Series racing.
After retiring as an active rider at the end of the '83 season, MK stuck around in AMA Flat Track for several years, and along the way also worked with/for Kenny Roberts, Mert Lawwill and Dick Mann with the Yamaha Virago project of the day. But in spite of his greatness as a talented rider AND knowing talent IN riders, Kidd's strength and legacy could and very well should be his ability to know the show and recognize the entertainment value of the sport. Owning and operating AMA Arenacross, he saw the value of motocross racing in smaller, out of the way venues to attract the paying customers and fans of motocross racing. Eventually selling his brand to Clear Channel (and then working for them on his baby for several years after), he later was involved with the Formula USA Flat Track Series of the late '90s.
Which brings us to today. The current AMA Director of Flat Track Racing was brought in by the Daytona Motorsports Group when their purchase of the AMA Pro Racing properties came about during the 2008 season. Knowing that Kidd knew the product, the fan base, the background and especially the entertainment value, the DMG folks gave him full rein to help turn around the Titanic of racing, AMA Pro Flat Track.
With dwindling crowds, a falling out of participants, and sponsorship dollars going the way of the Great Recession, AMA Flat Track was all but headed for it's own iceberg before Mike and Gary Kidd (MK's brother and long-time partner in racing) came in and took the helm. While also retaining former AMA GNC competitor Steve Morehead to help head up the team (who in all fairness was doing a great job with what he had to work with before the DMG takeover), Team Kidd and Company headed up a current AMA Flat Track team that has done a superb job of leading the series into a new, and revived decade. Concentrating on track preparation, obtainable racing equipment and the entertainment value of The Rolling Thunder Show, AMA Flat Track came out pouring the coals on during the 2010 season.
Ushering in new markets and venues, working on the timeliness/entertainment value of the series, and tweaking the rules to make multi-brand racing a headliner for the season, AMA Flat Track saw a season of positives all along the way, and also getting paying butts back into the seats at the race track and bringing in much-needed title sponsorship to the series in the way of K&N Filters and the Motorcycle Superstore.com folks. And 2o11 looks to be even better, if that is possible after the stellar year the series had.
With Mike Kidd heading up the team, anything is possible. And in this writer's eyes that is very positive as well! Go MK and Team AMA Flat Track!
-------------------------------------------------------------------------------------------------
In what I would like to call an 'it's about time' moment, Motorcycle-USA.com posted a super video today reviewing what they consider to be the 'bests' of the 2010 motorcycle season. And the best thing about it is they kicked it off by finally giving kudos to the man that headed up the great turn around in AMA Flat Track Grand National Championship Series Racing.

Mike Kidd, the current AMA Director of Flat Track Racing, was honored by the Motorcycle-USA.com folks for being the "Industry Leader" in motorcycle racing for heading up and turning the great sport of AMA Flat Track around during the 2010 year. Although I've been bragging on him for quite awhile now, I think it's super that someone that is a Nationally known site (compared to my little window of viewers here) took the time to brag on him as well!

Just into the intro of the video when they list MK as the Industry Leader is one of my shots of Mike in his blue AMA shirt when he came over to shoot the sh*t with Larry Lawrence (The Rider Files.com and Cycle News.com) and myself during the Springfield Short Track on Saturday Sept. 4, 2010. And just a little further they also used two of my black & white 'back in the day' shots of MK in action at the Syracuse Mile on his #72 Kruger Racing XR750. They come by fast, but you'll see them both just after the 22 second mark of the video.

Thanks guys, I appreciate seeing my stuff used for something so cool as this, let along giving credit where credit is due to the 1981 AMA Grand National Champion, Mike Kidd for helming the ship at AMA Flat Track Racing!