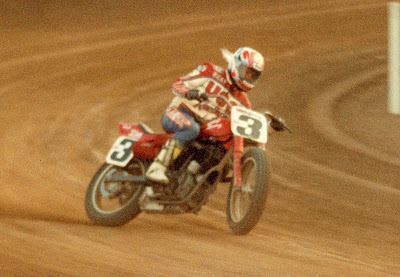 Ricky Graham powers the USC Racing Honda RS750 out of turn two during a practice session at the Lima Half Mile round of the AMA Flat Track Grand National Championship Series in June of '97. The former 3-Time Grand National Champion ('82, '84, '93) was one of the brightest talents to ever hit the track in the AMA Flat Track Series, coming into the series in the '78 season and winning his first Grand National event at the Indy Mile over former '75 GN Champ Gary Scott in August of 1980. While riding for one of the legends in the sport at the time, Graham won his first race (and championship) riding a Tex Peel Harley-Davidson XR750.
To this day, the man holds win records in the series that 13 years after his passing may never be eclipsed. In what has been referred to as his 'career' year in '93, 'Ricky G' won 12 Grand National events on the season, winning six events in a row during that glorious run, setting fast qualifying time in 12 of those events, and topped it off with six half mile wins on the season. He still sits fourth in the all-time win list with 39 Grand National event wins (behind Scott Parker, Chris Carr and Jay Springsteen) and holds the distinction of 'most years between championships' from his second championship in '84 until his career-topping grandeur year of '93. And those are just a few of the numbers this great racer put up throughout his career AND career year.
Ricky was reported to be making the switch back to the almighty XR750 for the '98 season after having been one of the last of the 'hold-outs' to stay with the Honda's. Honda's parts were running out finally after their late '80s pull-out from the sport, and what was left (according to those in the know) were extremely 'high dollar' compared to the costs of the H-D parts in those days. Several others were still running the RS750 in competition (including Terry Poovey and Rich King), but the red, white and blue bikes that took the dirt track scene by storm in the '84 season were quickly going the way of the dinosaur. Sadly, this is something we will never know, as the Man From Salinas died tragically in a house fire at his home in California on January 22, 1998 and the flat track community was left to mourn and wonder 'what if?' for what may be forever.
------------------------------------------------------------------------------------------------- 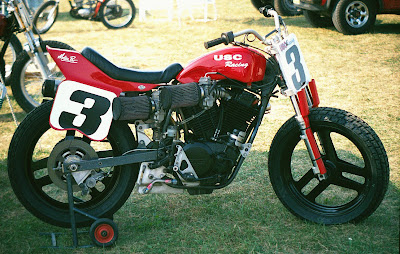 One of Ricky Graham's USC Racing Honda RS750s sits in the display area of the infield during the inaugural AMA Flat Track Hall of Fame Race at the Springfield Mile in early September of '98. This event was the first that Dave Despain had put together for the AMA Flat Track Grand National Championship Series stars to race in front of a sold-out crowd for a purse of $100K on the line.
Vendors had displays set up (Dan Mahoney was on-hand with part of his fabulous photo collection that had me drooling like a six month old baby) and people brought in former (and present vintage) race bikes for the crowds to peruse. Of course, Ricky's National #3 stuck out immediately to me, having been a fan of his since he had beaten another big fave of mine in his intitial GN event win at Indy in 1980.
I'm not sure who owned the bike at the time (or for that matter now!) but this one was always one of my personal favorites. Tuners to the Stars Johnny Goad and Skip Eaken had taken this (and others as well) to the tops of podiums against the might of the H-D Factory Machine and had thrashed them pretty hard for several years along with Ricky G and Bubba Shobert at the controls. Goad was the team owner/tuner and Master of All with Graham in that great run in '93 with the Audiovox/Team Undo Honda, and between Ricky's throttle hand and JG making those RS's sing, it was some year that gave Honda fans such as myself a glimmer of hope against the impending XR onslaught.
(Of side note, the Bubba Shobert bike I posted a couple of months ago from George Barber's museum was once also owned by Dave Lloyd, of Lloyd Brothers Motorsports fame.)
-------------------------------------------------------------------------------------------------

On the 13th annivesary of his passing, Ricky Graham is still remembered for his charisma and his ability to do things on a flat track machine that mere mortals such as myself just shake their heads at seeing. I've been a big flat track fan since the early-mid '70s, and have never met, known or seen too many racers I didn't admire or like, on or off the track. Being one of the kinds of fans that likes and appreciates them all, over the years I have obviously had several favorites in the AMA Flat Track Grand National Championship Series.

But like ALL fans, I also have my 'all-time' and/or 'top' favorites, and Ricky Graham pretty much tops that list for me, first catching my eye at Indy when winning his first AMA Flat Track GN event over '75 AMA GN Champion Gary Scott on August 24, 1980. And after winning his first championship with Tex Peel in '82 and then hooking up with the all-new Honda's in '84 and all but setting the series on fire at the time, well, it was pretty much all done by then. Let alone the damage he ensued on his competitors in his Career Year of '93. 'Ricky G' was the man!

Every year on January 22, I try to take the time to go back through my archives of shots, magazines and/or thoughts, and remember the man that passed away at an all-too young age, and reminisce of his great feats on the AMA Flat Track Series. And I remember all of the thrills,
chills and smiles he put on my face as a 'more than average' AMA Flat Track fan during those almost-two decades of watching him race. I also remember what a great run he had and how he was not only a great racer, but was also a mortal that dealt with, and got past his demons, and showed us all what a great talent he truly was. But most of all, I remember that big smile and his ability to whip it up on a flat tracker almost like no other.