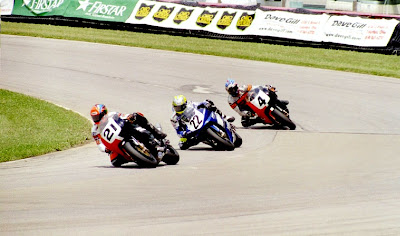 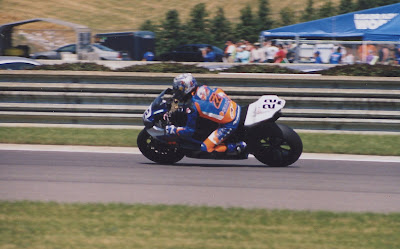 After having won races and championships in just about every other AMA Road Racing class he has raced in, Tommy Hayden finally got it done in the premier class yesterday to break his cherry in AMA Superbike racing by winning race two at Fontana to beat Josh Hayes to the line by less then a half a second. Tommy took the win aboard his Team Rockstar Makita Yoshimura Suzuki GSX-R1000.

Having suffered from the classic 'bride's maid' runner up for so many times and after 13 years of on/off running in the Superbike class, Hayden was able to hold off the charges of Hayes on the Graves Yamaha and of his own team mate, Blake Young on another Team Yosh GSX-R1000. Tommy dedicated the win to his Dad, Earl Hayden, who has been the man behind the three brothers-Tommy, Nicky and Roger Lee-that have raced and triumphed on the track since they barely able to swing a leg over a race bike.

The race was marred by a crash involving Aaron Yates on the #23 Michael Jordan Motorsports Suzuki during the morning warm-up. After setting fast time in the only qualifying session-due to the intense winds on Saturday causing cancelation of session two-and putting it on the box in race one, Aaron again set face pace for the second race warm up, only to crash and get hit by Chris Ulrich when he went down-to no fault of Ulrich's as all in hand said it was a case of 'no where to go.' Here is a clip from the folks at On The Throttle TV from another link over at RoadRacingWorld.com that has Yates' crew chief Richie Alexander talking about what happened and what directions the team may have to go if Aaron isn't able to return by the next round at Road Atlanta April 16th. That part doesn't sound too good as he apparently suffered two breaks in the fibula and tibia parts of the leg. More on that here as well:

Congrats to Tommy and Team Yoshimura for the break out win, and for finally getting the monkey off the back. We've been watching him race for a long time now and to see him get that big class win is monumental. Many years of hard work and dedication does pay off. And it doesn't hurt that he's a great guy! Great job Tommy Gun!

You can read the official race review and results below, and check out the video of official press conference.