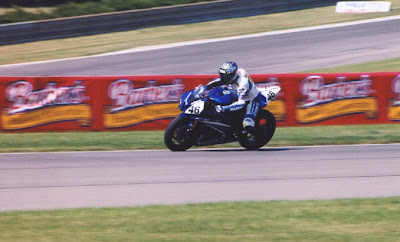 Josh Herrin #46-now running #8 for 2010-in action during the AMA SuperSport race at Barber Motorsports Park in April of 2007. Running for the same Team Graves Motorsports Yamaha team, the youngster spanked the competition last night in winning the 69th edition of the Daytona 200. Nearly flawless pit stops by his great team helped to seal the deal.

Josh Herrin on the #8 Team Graves Motorsports Yamaha R6 won the Daytona 200 endurance race last night by using nearly flawless pit stops and good traffic strategy to take the top spot on the podium for the 69th running of what was once the classic North American motorcycle race.
Dane Westby on the #2 Project 1 Atlanta Yamaha R6 finished second a little over 7.9 seconds back, and perennial iron man Steve Rapp on the #15 Team Latus Motors Racing Ducati 848 finished a solid third a little over 24.4 seconds back of Herrin. Rapp won this event in '07 while running for the Attack Kawasaki Squad, and has been riding in AMA competition for over 14 seasons now and did a fine job of bringing it home.
You can check out the official results and the official press conference below to get the full meal deal on this eventful race.

Provisional results of the Daytona 200 courtesy of John Ulrich's group of hard working pro's over at http://www.roadracingworld.com/. Their coverage and updates over the course of the week have been outstanding:
http://roadracingworld.com/news/article/?article=39653


Daytona 200 press conference thanks to Dean's crew at http://www.superbikeplanet.com/ who according to their Facebook.com page were 'asked to leave the pitlane' the other day. In spite of the DMG's outlook on these great folks, they tell it like it is:
http://superbikeplanet.com/2010/Mar/100306b.htm

Congratulations are in order not only for Josh for such a fine ride last night, but especially to all the riders and participants, and a special tip of the hat goes out to the DMG folks for starting off the season on a very high note and making it known that they are willing to help, learn and listen to everyone to ensure the series has a good year and no problems to follow such as the 2009 debacle in running the show. Bravo!
I also added the link in yesterday's post for the second superbike race press conference. The general feeling was good in Daytona after the way the series was handled last year. Ben Bostrom had a very nice comment about it all so if you get the chance to check it out, do so. Bravo again!
Thanks for following along with us for the road racing and flat track running of the races from Daytona this week. It's been a blast and although I plan to revert back to my normal writing and posting intervals, I wanted to try and follow the new year as quickly and as closely for all that I could. It's been a lot of fun and I'm looking forward to a new year, let alone a new outlook from the offices and managers of the AMA and DMG people. Other then the AMA Flat Track Live Timing and Scoring clusterf..k that we are confident they will have worked out by the next round, it has been a great week. Thanks again for taking your time to come by, see my old stuff and put up with me on a rant....or an occasional non-rant, even. God Bless to all and take care!
-------------------------------------------------------------------------------------------------
Posted by Stuman714 in Indy at 1:05 PM