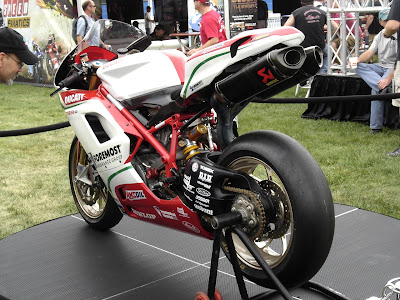 In an opening salvo to the AMA American Superbike season, Larry Pegram lead all comers today in both practice sessions at Daytona to set his stamp of authority on the beginning of the season.
However, the AMA Live Timing and Scoring has been suffering through some major glitches today that all but has kept the timing site down. Once it finally did come back up, the new-look link stayed on results of the first Daytona SportBike session-led by Martin Cardenas-and never updated beyond.
And from a post over at http://www.flattrack.com/, other people were having the same problem as I have all day over on the AMA Flat Track side and couldn't get anything more then the last results of the Supercross race from Atlanta last Saturday. One person did post that said to the effect that Mike Kidd (AMA Flat Track) did say the timing and scoring would be up for the races themselves this evening at the short track. We'll see and are waiting patiently.

As of this writing, at 6 P.M. EST, the 'live timing' link had been completely removed from the road race side and the link on the flat track side took you to Saturday's Supercross results in Atlanta.

Here is the 'new' link as taken off of the AMA Road Racing site earlier today:

We sincerely hope that the glitches experienced throughout the day today on both the AMA Road Racing site http://amaproracing.com/rr/
and the AMA Flat Track site http://amaproracing.com/ft/
are not something that we will have to put up with throughout the course of the rest of the event. We would like to think that they can get these details worked out at least by this evening to where by tomorrow we can follow the great live timing and scoring that we have come to expect out of the people at the AMA. And that their oversight in having these problems on the first day of the first races of the season are just that. An oversight. We are patient, but........

The shot I picked above for this irate sounding post is of Larry Pegram's Foremost Insurance/Pegram Racing Ducati 1098R as was on display last August at the Indy MotoGP round. This was a diplay of the bike Larry used to contest the '09 season last year in AMA American Superbike and won three races with, including a surprise victory over 7-Time Champ Mat Mladin in the second race at Elkhart Lake's Road America in June.

Here's a link to a great article penned by Paul Carruthers over at http://www.cyclenews.com/ that talks about Larry's first session today:
http://cyclenews.com/articles/road-racing/2010/03/03/pegram-gets-it-started

We wish Larry the best of luck and a tip of the helmet for his first day's work effort at the opening round today, and we wish all the competitors the best of luck and safety. At least we are back racing. Now, if the AMA can get the technical problems straightened out with the live timing and scoring, this could be a great race event to see and watch over the next few days.

Thanks again for hanging with us here at Stu's Shots and listening to me rant again! Maybe they'll be able to get these problems worked out for us fans and I won't have to rant again. At least not this week....
Maybe I just have too much passion for this sport, and it might just be me. But I doubt it. And as I have proven in the past, if I am wrong I will retract my statements and offer a complete and total apology to those parties involved. Until then, it appears as amateurish at best coming from the professional series that they are.
But we are still waiting patiently.....

....and apparently so are others.
As of 8:35 P.M. EST over at www.roadracingworld.com, this was just found on the problems having to do with the timing and scoring:
http://roadracingworld.com/news/article/?article=39626

According to a post over at www.flattrack.com, Mike Kidd with the AMA has said that they are having problems with the software for the timing and scoring on both the RR and the FT side. They ARE working on the problem as this was posted.

Here is the Twitter link that seems to be updating current race info at the short track: