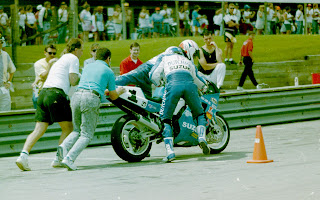 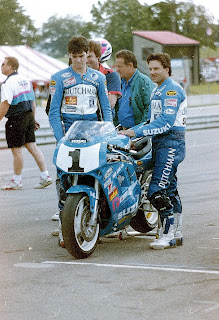 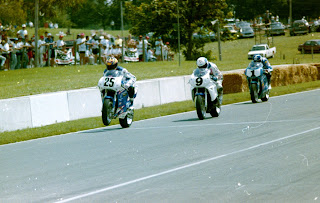 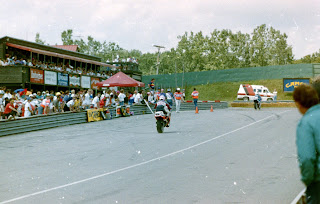 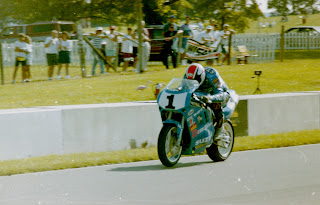 For those of you who have followed the AMA Road Racing scene in the last two or three decades, the name Andrew Stroud probably rings up memories of Formula Xtreme Championships in the late '90s for Erion Racing, as well as riding for Dutchman Racing in the EBC Endurance Series in the early '90s. So what would a guy who traveled half way around the world to run the U.S. series be doing today at the ripe young age of 43? Superbike racing..........and winning, to boot, in his homeland of New Zealand. And from what I was able to find on him, doing a heck of a job of it at that, and not just this season. He HAS been for several seasons. The guy must be an ironman to still be jammin' it WFO on a superbike after all these years. Not that 43 is THAT old, but for racing finely and highly tuned superbikes, that's a dinosaur.
Mr. Stroud first hit the U.S. scene, at least to my meager remembrances, in the early '90s racing the big GSXR1100's for Dutchman, and then won the Formula Extreme class in '97 riding a Honda CBR900/929-based open bike for Erion Racing. And that year he won 7 of 9 races for the season. So it's not like he just has had a little fluff to spread around here and there, he wrote the book for consistency and bringing it home on the top of the box. But that's not all....
One of Andrew's other accomplishments that I recall is he helped the late John Britten ride and develop the Britten V1000 that he had designed, engineered and built from the ground up back in the late '80s and early '90s. The Britten motorcycle was on the edge of not only refined and superb craftsmanship and design, but it was almost impossible to build your own race bike to go against the 'Big 4' and compete at ANY level with them. You can read about the Britten's here and see what an accomplishment John Britten made to the world of motorcycle racing before his too early and untimely death:
http://www.britten.co.nz/
So when I saw that one and young Mr. Andrew Stroud was still kickin' a** and taking names in motorcycle racing, and now back closer to home half way around the world, I not only thought how friggin' cool but that I needed to drag a few shots out of him from back in the day to help him to celebrate his race wins and career accomplishments. It's great to hear and see this kind of thing out of people you have followed over the years, and this guy was and still is one of the best. You can also read the official news right here thanks to John and his people at www.roadracingworld.com, the great folks at New Zealand Superbike at Blogspot as well as
those at Southland Times from www.stuff.co.nz down under:
http://roadracingworld.com/news/article/?article=39271
http://nzsbk.blogspot.com/
http://www.stuff.co.nz/southland-times/sport/3255764/Its-going-to-be-all-on-Stroud
While you are reading up on Andrew Stroud, I'll fill you in on Stu's Shots for today.
While racing for Dutchman Racing in the '92 season at Mid Ohio, the top shot shows Stroud having the reigns handed over to him on the big GSXR1100 by his team mate Scott 'Z-Man' Zampach. As a sister event to the Superbike class and the 600/750 classes in those days,
EBC sponsored the EBC Endurance Series events that ran as a three hour show on one of the days throughout the weekend. As a capper event for those guys that year, they ran what they called the Monster Bike Shootout before Sunday's main 600 and Superbike events. It was a five lap shoot out, included the standard starts, WITH a rider switch thrown in for good measure. Hey, part of endurance events IS switching off, right?!
The second shot is Dutchman team mates Andrew Stroud (L) and Scott Zampach (R) on the grid for the intros for the Monster Bike Shootout at high noon on Sunday.
Next up is Z-Man on the #1 Dutchman GSXR following the #25 Fastline/MCM Racing on their Suzuki GSXR1100 and #9 Team America on their Honda CBR900/929-based endurance mount.
We then see Dutchman leading #13 M2 Racing on their CBR900/929-based bike out of the pits after a rider switch. And to close out today's post, last but not least a shot of Andrew flashing past the start/finish line and pits during his stint on the big Dutchman Gixxer.
Thanks again for taking the time to hang out with us here at Stu's Shots and we hope your stay has been pleasant. And we look forward to being able to host your presence again soon. Take care, God Bless, and have a great week!
Posted by Stuman714 in Indy at 6:05 PM