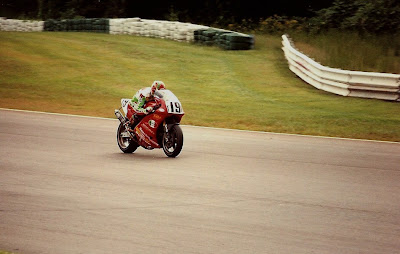 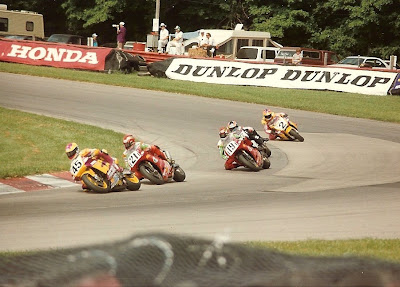 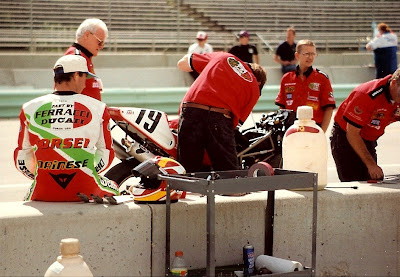 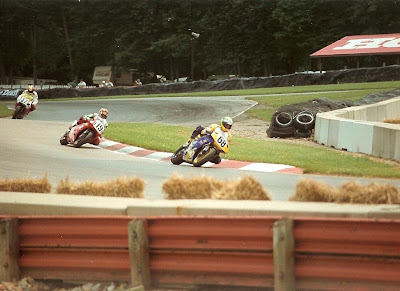 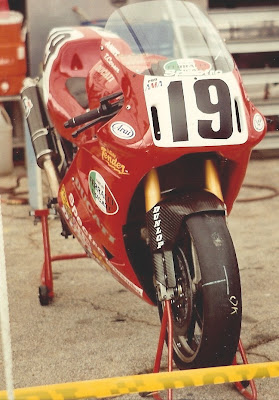 Troy Corser burst onto the world motorcycle scene in '94, when after having won the '93
Australian Superbike Championship, he was given a try out by Eraldo Ferracci on one of his
FBF (Fast By Ferracci) Ducati's at the urging of former World 500cc Champion Barry Sheene.
Passing the try out with flying colors, Mr. Corser then set the AMA Superbike scene on fire
during the '94 season, and won the title outright as a rookie by clinching the title at the season
ending round at Road Atlanta over '89 AMA Superbike Champion Jamie James by one point.
What had been considered all but undoable in coming to the states, on unfamiliar equipment
(after having ridden a Honda RC-30 to the Australian title in '93), racing on tracks he had
never seen before, and racing against a crop of factory-backed racers that were hungry for
blood. Needless to say, it wasn't 'undoable' and Corser and Ferracci put the stamp of approval
on a season that saw the FBF team take their second AMA title in two years, after having won
the World Superbike crown with one Mr. Doug Polen in the '91-'92 seasons, and the AMA crown in '93. Quite a run for sure!
Fast forward to the upcoming 2010 World Superbike season, and the accomplishments that Troy Corser has amassed in the world motorcycle racing scene are too numerous to list here.
A few highlights would be his double World Championships in '96 for Ducati and '05 for Suzuki,
and his nickname of Mr. Superpole garnered after having bagged numerous pole positions over
the years in World Superbike as well. Not too mention his ability to set up and test a road race
machine and his sheer ability to bring it home in one piece.
Thanks to the very fine folks acrossed the pond at the very fine site http://www.crash.net/, Troy speaks
about his career 'winding down' and how after the first season with the new BMW superbike what his expectations are and how he would like to be able to cap off such an illustrious career.
A very interesting article and discussion with TC to say the least, which I have included below
along with Troy's official website and another interesting link with some background on him as
well. Good reading and enjoy:
http://www.crash.net/world+superbikes/news/155614/1/corser_reveals_his_final_career_goal.html
http://www.troycorser.com/
http://en.wikipedia.org/wiki/Troy_Corser
The shots for tonight's post are from the '94 season here in the AMA Superbike Championship-
when men were men, superbikes were weapons of choice, and racing in America was a good thing. From the top, you have Troy on his #19 FBF Ducati blazing a trail on the back straight
at Road Atlanta in practice for the season ending round that weekend. Then on to Troy in a pack
of riders at Mid Ohio during the superbike finale. Leading his team mate #21 Pascal Picotte on
another FBF Duck is future 2-Time World Superbike Champ #45 Colin Edwards en route to his
first AMA Superbike win for Vance and Hines Yamaha, with Miguel Duhamel on the #17 VR-1000 Harley Davidson partially hidden behind TC, and bringing up the rear is Jamie James, the
former AMA Superbike Champ on the #2 Vance and Hines Yamaha.
We then have a shot from earlier in the season at Road America during practice of Troy hanging
on the wall as Eraldo Ferracci looks over the scene as the team works on the #19 superbike. Then back to Mid Ohio during practice as Troy runs behind Mike Smith on the #68 Smokin' Joe Honda RC-45 followed by Eric Moe on the #57 as they take the last corner onto the pit front stretch. And last but not least is a shot of Troy's championship-winning mount in the paddock at Road Atlanta.
Thanks again for stopping in to hang out with us here at Stu's Shots and we hope you are doing well in the new year and the arctic cold that has enveloped the midwest hasn't totally frozen you
out from reality. Less then six weeks to the opening round of the World Superbike Championship and we will be able to feed our passion of motorcycle racing once again! God Bless and take care and we hope to see you back here again soon--and hopefully not with your tongues frozen to a
metal light pole.
Posted by Stuman714 in Indy at 7:36 PM