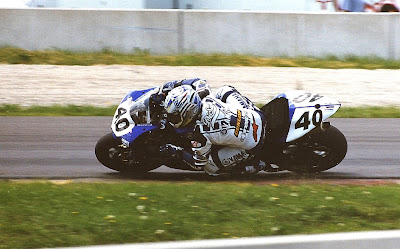 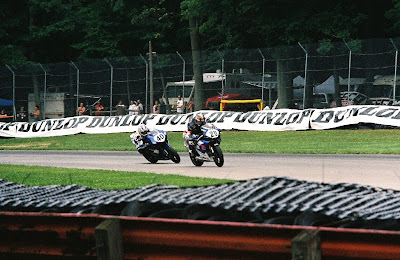 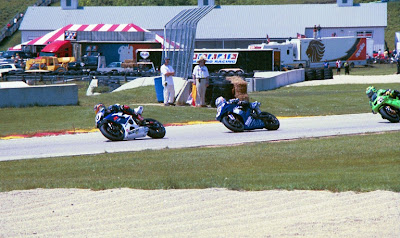 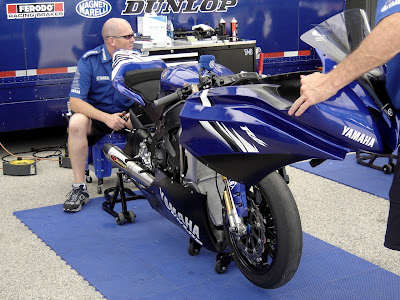 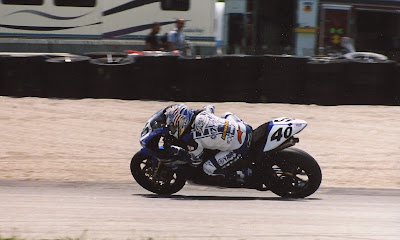 Add Jason DiSalvo's name to a growing list of former American racers who have competed
in the U.S.-based AMA Road Racing series that are headed acrossed the pond to contest
the World Supersport or World Superbike series for the 2010 season.
Per the official releases from Jason and from the ParkinGo Triumph World Supersport Team
as shown below, Jason will be riding a Daytona 675-based three cylinder for them for the
'10 season. You can read the official releases below thanks to the great folks at
http://www.superbikeplanet.com/, http://www.roadracingworld.com/ and the official release from the
ParkinGo folks at http://www.be1racing.com/:
http://superbikeplanet.com/2010/Jan/100118-disalvo.htm
http://roadracingworld.com/news/article/?article=39176
http://www.be1racing.com/
This is another blow to the AMA series, having already lost Chaz Davies and Roger Lee Hayden. Davies will be DiSalvo's team mate on the ParkinGo Team for the 2010 season, and Roger Lee
will be riding a satellite Kawasaki for Team Pedercini in the World Superbike series as was
reported several posts ago. With the economic fall out adding to the woes of the mis-managed
series under the helm of the DMG folks, the U.S. series is taking a beating and we are only
six-some odd weeks out until all of the teams show up for Daytona the first week of March.
Adding to the series woes are the slimmed-down purses and the lack of some factory involvement and the U.S. series is looking pretty weak right now.
Hopefully with the new people from the DMG in charge this year, they still have a chance to build something back up from the stripped and weakened series. Having at one time been considered a world class series, the AMA series is now considered a skeleton of it's former self. Again you can't rule out the economy, but the mis-managed series did a great job of shooting itself in the foot several times throughout the 2009 season to put it in the position it is now. Here's hoping they can turn our once illustrious U.S.-based championship around to it's once prominent stature.
While you are reading up on Jason's move across the pond, I'll fill you in on today's Stu's Shots
to go along with today's posting.
First up is a shot of Jason on his #40 Graves Motorsports Yamaha R1 while practicing for the
2006 AMA Superstock race at Road America in the turn 8 area. Then we have a shot of Jason
from the '05 season at Mid Ohio as he runs with Aaron Yates on the #20 Team Yoshimura
Suzuki GSXR1000 during the Superstock final event that weekend.
Also from the '05 season we see Jason chasing Aaron Yates again into turn 14 during the
Superstock final at Road America. Roger Lee Hayden on the #95 Team Kawasaki ZX10R is
keeping them within reach as well. Then from the '06 race weekend we have a shot of a couple
of Chuck Graves' finest as they button-up Jason's #40 Graves Motorsports Yamaha R6, getting
it set for the 600 Supersport final later in the weekend also at Road America.
And last but not least is another shot out of turn 8 at Road America during practice for the '06
Superstock race of Jason whipping it up on his Graves R1.
We wish Jason all of the best in his future endeavors for the upcoming season, and we'll be
keeping an eye on him as he takes on the world scene. With the progression seen last year
of the ParkinGO team, maybe the addition of Jason and Chaz for this year will help all of them
move further up the podium and the standings.
And thanks to you for coming by to hang with us here at Stu's Shots. It should be an exciting year, if not a challenging one, at that. And we are looking forward to bringing you more of
the archives of Stu's Shots to go along with the exciting racing in the upcoming season. God Bless and we hope to see you back here again soon!
Posted by Stuman714 in Indy at 3:22 PM