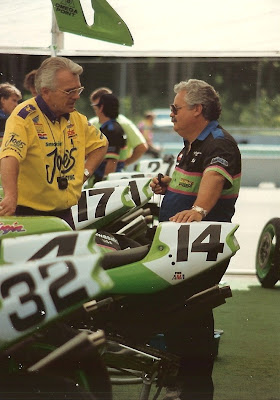 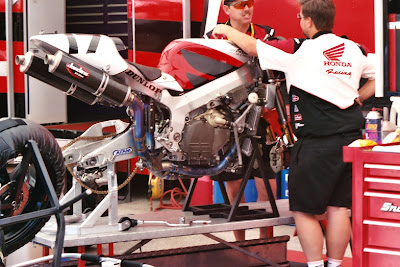 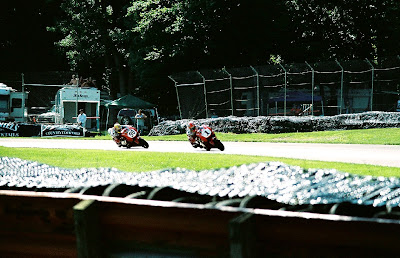 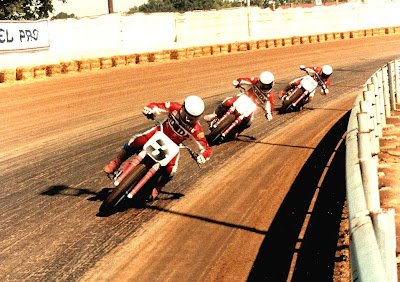 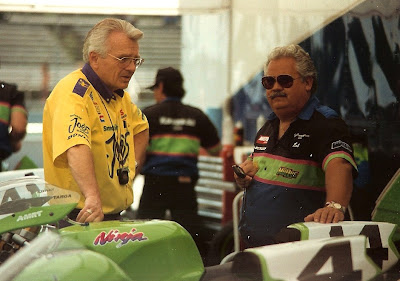 Most of the time, the guys behind the scenes in motorcycle racing don't get the grand
treatment that the riders do. They are running the team, hiring personnel, overseeing
the budgets, yada, yada, yada......
Last Saturday, one of those guys not only got the grand treatment, but he was inducted
into the AMA Hall of Fame class of 2009 That man, Gary Mathers, possibly hired and sired more winning riders and winning teams then anyone in AMA, or possibly even, world racing history.
Starting with Team Kawasaki in the mid '70s and retiring with Team Honda in 2001, names such as Eddie Lawson, Wayne Rainey, Bubba Shobert, Ricky Graham, Miguel Duhamel, Jake Zemke, Fred Merkel, Mike Baldwin and Randy Renfrow, were a few of the riders that competed for Kawasaki and Honda under the tutelage of Mr. Mathers. Not to mention tuners such as Rob Muzzy, the late great Sparky Edmundson and Merlyn Plumlee. The list goes on and
on as do the championships fought for and won and earned. The man is a legend to say the least.
To help celebrate this, and all of the grand achievements that Gary Mathers brought to the
world of road racing and flat track racing, let alone all the glory, I have put some shots together
of Gary and Rob shooting the bull at Road America in the paddock in '94, as well as some shots
of some of those riders and equipment.
The second shot in this series is a shot of Miguel Duhamel's RC-51 Superbike in pre-race
tear down trim while a couple of the team wrenches discuss strategy. The third shot in is
Miguel Duhamel on the #1 Honda CBR600RR leading his team mate Jake Zemke on the
#98 as they go about running away with the FX race at Mid Ohio in July of 2005.
Fourth shot in is one of a series of shots I took at the Indy Mile back in '84. This was in the
Sunday afternoon race as Team Honda RS750-mounted Super Team riders Ricky Graham
#3, Doug Chandler #10, and Bubba Shobert #67 do their impression of checking out on
the field in the final.
Congratulations to Gary Mathers and the rest of the 2009 inductees. And thanks for
all the great memories and great racing over the years. You helped put on one heck of
a great show for a very long time!
And thanks as always to the GREAT folks at www.cyclenews.com for the link on the story of
the induction ceremonies, and thanks as well to the AMA Hall of Fame for the official link
on the rundown on Gary Mathers.
Also a big thanks to you for coming by and sharing your time with Stu's Shots. It's great to
have you and I hope you can find time to come back by again soon! Take care and enjoy!