Cool Bikes At Cool Bike Races...and a Big Thanks to Florida Steve at 2 Stroke Biker Blog!! 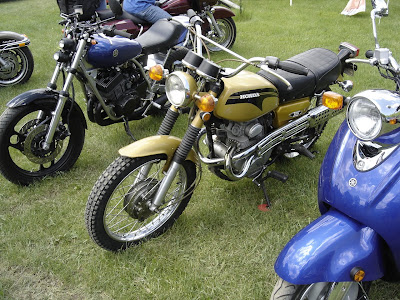 More often then not when going to all these different races over the years, we've also come
acrossed some pretty cool street bikes along with the usual array of high performance--and
high dollar--racing machinery. The bikes that pique your interest may be different then the
ones that pique your buddy's. But that doesn't make them any more or less significant, just
unique to what YOU or THEY consider unique, rad or sick. And they don't have to be some high dollar Euro machine, or some over-chromed virtual boat anchor, nor some high performance
rice burner that sings like a chain saw on acid. They can be your normal run-of-the mill breed,
a low dollar home-build, or even a rare-or getting rare as you get older-model you coveted as
a child or a teenager in lust.
One of those for me was the early to mid '70s Yamaha R5 and RD series bikes built on the 250/
350/400 2-stroke platform in the day. They were relatively inexpensive, easy to maintain,
and gas AND oil were cheap in those days. Think cheap--good gasoline, before ethanol blends,
could be had for less then 50 cents a gallon. And even based on a bike that would get 30-35
miles per gallon, at that price you didn't even THINK about fuel mileage in those days.
I came acrossed this hybrid-built bike at Elkhart Lake back in '06. The attached story from
Florida Steve's http://2strokebiker.blogspot.com/ site will tell the full story behind it, but
wanted to show you another shot of this beauty I took as it sat next to an early '70s Honda
CL175 that was immaculate as well. A stark contrast in the bare bones but very well built
Honda high-pipe Scrambler, which appeared to be bone-stock, right down to the tires even.
And the RD-inspired street tracker with the hand machined rear sets and radical look
stingers on the expansion chambers in a flat track-themed rolling chassis. BOTH very sweet
and both quite the bike for their day. And even today!

So take a read at what Steve has to say as he is the 2 stroke king knowing these bikes, and then
what I had to throw in from when I took the shots. Maybe someone out there will recognize
this sweet piece and contact us and fill us in on it. And being the old 2 stroke head that I have
been, that would just be SMOKIN'!!

Thanks for coming by, and thanks again and as always to Florida Steve for helping to diplay
some more of my stuff. Check his stuff out as he runs an ultra sano site with some ultra
sano pics and info. I just can't stop drooling...or smokin'.......

Merry Christmas and Happy New Year to all! And to all a good night.....