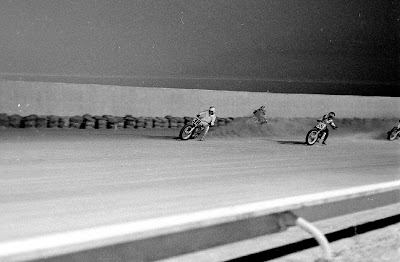 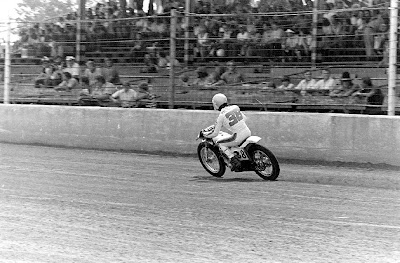 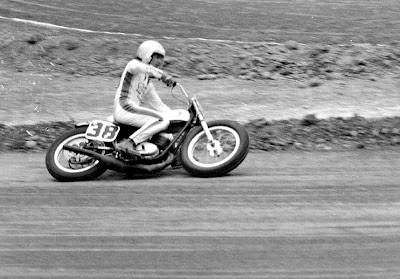 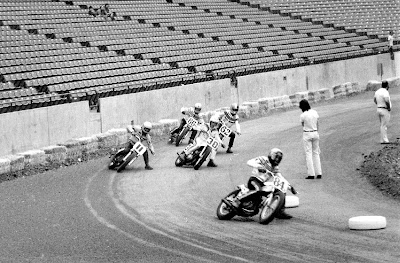 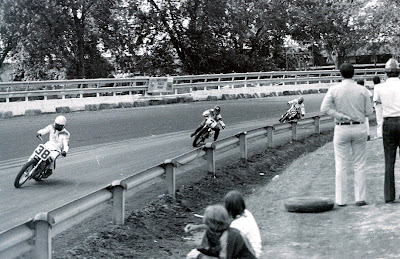 With all due respects to Brett over at http://www.triumphflattrack.com/, I want to take the time
to profile 2009 AMA Hall of Fame Inductee Mr. Chuck Palmgren, former National #38,
former Triumph factory rider, and former Indy Mile Winner.
When I first got into this dirt track thing back in the summer of '74, Chuck was one of the
hot shoes on the scene and had been so for quite some time. Having left Triumph at that
point, he was riding the All American Racers--AAR--sponsored Yamaha twin. Having a guy
sponsored by legendary racer/tuner/engineer Dan Gurney in motorcycle racing was big
to a kid like me at the time of 18 and having lived and loved Indy car racing for years, knew
about DG. And as naive as I was at the time and just a newby to the sport, I figured the guy
was probably pretty good. And I wasn't wrong. He won several nationals and was always in
the hunt and had already won Indy a year or so before I actually found the sport. And the guy
was a jewel to watch as you knew he might just be running it at just about any spot on the
track to make that Yamaha work.
So today we salute Chuck Palmgren for his past accomplishments and for being one of the
nice guys in the sport, and for his being enshrined this coming weekend in the AMA Hall of
Fame. Mr. Palmgren, please take a bow. Congratulations to you and to those that helped
you along your journey to make it to the big hall. And thanks for the great memories!
I threw in the link to Brett's story over on http://www.triumphflattrack.com/ as he actually has
a real nice shot of Chuck on the Triumph. And after reading his story, I thought it would
be better served to include his story on this legend. And I also tossed in the official release
as was sent out by the AMA Motorcycle Museum and Hall of Fame. You can find those links
here:

http://www.triumphflattrack.com/2009/12/congratulations-chuck-palmgren.html
http://www.motorcyclemuseum.org/news/story.asp?id=1563
http://www.motorcyclemuseum.org/halloffame/hofbiopage.asp?id=425
And while you are checking out the official news on the ceremony for this w/e, you can also
check out the shots I have added to help salute one of the heroes of flat track.
In the top shot you can see Chuck running it in on the outside hard going into turn 3, just
hammering Steve Morehead #42 on a Triumph right behind him, while coming up the inside
is #68c Steve Freeman on his XR.
In the second shot we have Chuck going into turn 1 at Terre Haute in 1975, followed by a
shot of him on the Yamaha 360 short tracker during practice for the Pontiac short track race
in '76.
In our fourth shot we have #84x Ted Boody, #11 Don Castro, Chuck, #62 Corky Keener, as
well as #86 Ken Springsteen running together in practice for the short track at Pontiac in '76.
And last but not least we have a shot of Chuck at Syracuse in '75 as he leads '69 Grand
National Champion Mert Lawill on the #7, with #92 Steve Droste on the HJ Products-
sponsored XR right behind.
Again, we want to thank and congratulate Chuck Palmgren on his induction this weekend
and I want to thank everyone for taking the time to come by and hang out. And I hope you
can come back again soon! Take care and enjoy.
Posted by Stuman714 in Indy at 5:55 PM