Nicky Speaks And We Listen.... 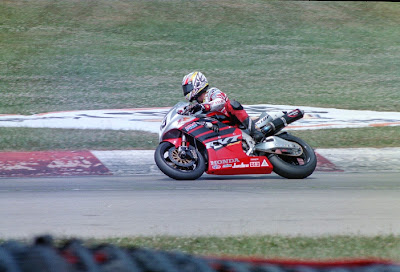 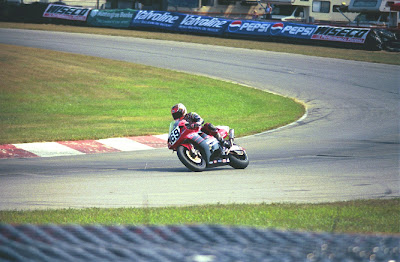 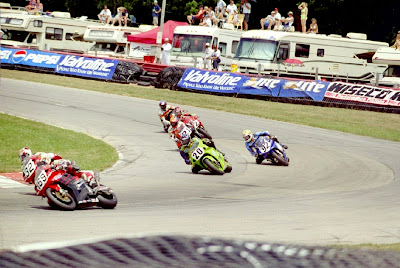 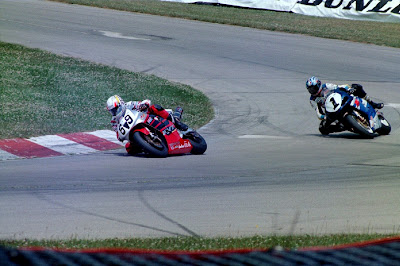 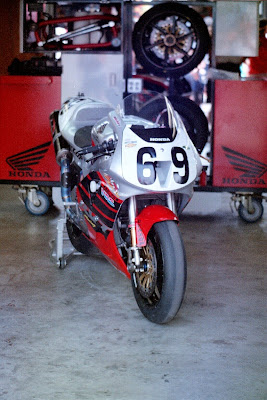 Or at least we read. But that's another subject for another time.....
Thanks to Dean Adams and crew over at http://www.superbikeplanet.com/ for the awesome interview
with '02 AMA Superbike and '06 MotoGP Champion, Nicky Hayden, we can all check in with
Nicky and see what he has to say on his overall season from this year and what he is expecting
out of the Ducati team for the upcoming 2010 MotoGP season. You can read it here:
http://superbikeplanet.com/2009/Dec/091213-69-interview.htm
While perusing the interview-and the other bitchin stuff on Dean's site-you can check out the
pictures to go with today's posting. These are a small offering of shots I took of Nicky
while he was riding for Honda here in the States during the '99 and '01 seasons at Mid Ohio.
While filling in as a 'wild card' rider on the official factory team in '99, Nicky sported the #169
while riding the RC-45 during the latter part of the season that year. One of the shots shows
him in practice, while the other shows him running high, wide and handsome on the outside with a group of riders during the Superbike final that weekend in turn 14. Others in that shot include team mate Eric Bostrom #32 on another of the ultra radical RC-45's as well as Aaron Yates on the Muzzy Kawasaki #20, with Team Yamaha's Jamie Hacking on the #92 in tow, team mates Pascal Picotte #21 and Scott Russell #4 on the Team Harley VR1000's sandwiching the
Competition Accessories Ducati of #72 Larry Pegram.
Also at the top is Nicky on the #69 RC51 in turn 14 in route to winning race 2 of the weekend
at Mid Ohio in '01, as well as a shot of him having just gotten around '99-'01 AMA Superbike
Champion--at the time--#1 Mat Mladin. And last but not least is a shot of his race winning Team Honda Universal Studios RC51 in the paddock area. Nicky went on to win the Superbike
Championship in '02 while riding for Team Honda America as well.
Thanks again to Dean and company for the sweat and efforts to get this interview for all of
Nicky's fans. We all hope that 2010 brings the same results at EVERY race as what we saw
out of The Kentucky Kid during the Indy MotoGP round. Go get 'em man!
And thanks to everyone out there for stopping in today. Enjoy and take care!
Posted by Stuman714 in Indy at 7:19 PM