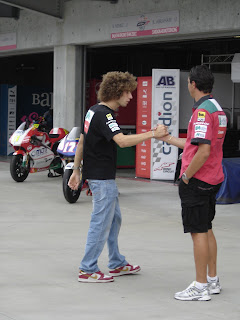 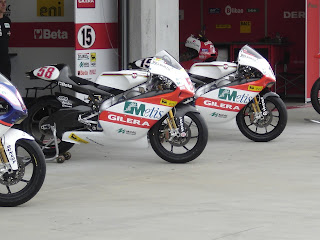 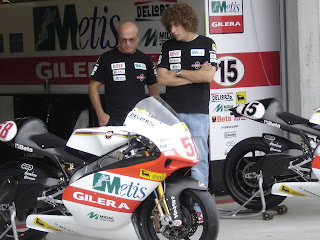 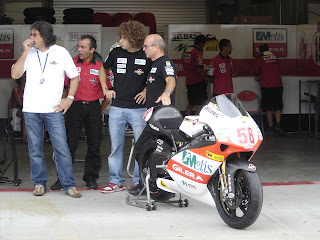 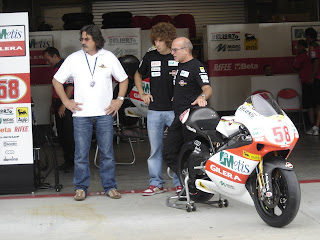 Some of you that follow auto racing, and yes, other then NASCrash, might be looking at
the pictures above and thinking to yourself, 'hmmmmmmm, I didn't know that Boris Said
had a younger brother.' Well, to my knowledge, he doesn't, but to those who follow
the MotoGP World Championships, and are familiar with the current stock of 250GP riders,
you WILL recognize reigning 250GP World Champion Marco Simoncelli in the above shots
along with his team and crewmen from Team Gilera.
Having raced in the European series in originally the 125GP class, and for the last 3-4 years
in the 250GP class, Marco did some testing this last week for the Aprilia World Superbike
Team, and is running the Imola round of WSBK this w/e. He did so well on his initial race
ride on the bike that he made the Superpole cutoff and into the 3rd and final round to
qualify in his maiden WSBK race in the 8th slot, outside of row 2. Quite impressive for
anyone who hasn't raced the diesels on a regular basis, and has been tenured in the soon-
to-be non-existent ring ding classes for the last 6-7 years +/-. Not to mention carrying
the weight of that 'fro around, he must be giving up a couple of kilos in weight in hair alone!
Here are the results of Superpole 3 in Imola that wrapped up a couple of hours before this post,
and after a link to where you can follow the schedule and remaining races in Italy through tomorrow. Keep in mind that Italy is +6 hours to Eastern Daylight Time in America, and in
global terms is GMT+2. Enjoy! Go get 'em Marco!
http://sbk.perugiatiming.com/pdf_frame.asp?p_Round=ITA2&p_Anno=2009&p_Manifestazione=12&p_Gara=01&p_Sessione=Q6A&p_Stampa=RIE
http://www.worldsbk.com/it/news/ultime-news/264.html
http://www.worldsbk.com/livetiming/
The shots above were taken of Marco and crew in the paddock area during the Indy round
of the MotoGP World Championships at Indianapolis Motor Speedway, the World Capitol of
Racing, on August 28, 2009. He also won the 250GP main event that w/e on the #58 bike as shown.
You can also find out more about Marco here:
http://en.wikipedia.org/wiki/Marco_Simoncelli
http://www.marcosimoncelli.it/
http://www.facebook.com/pages/Marco-Simoncelli/20002058251
http://www.crash.net/motogp/news/152597/1/marco_simoncelli_to_make_wsbk_debut_at_imola.html
Posted by Stuman714 in Indy at 12:45 PM