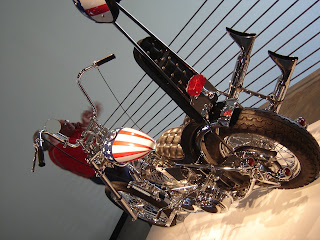 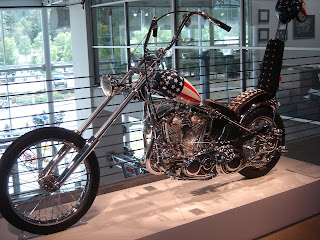 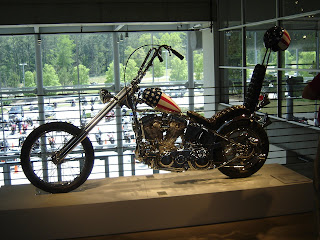 I know, I know, you come to take a look at some races shots and this guy has pictures of
a 40 year old piece of lead on his blog! Jeeeeeeeeeeeeezzzzzzzzzzzzzz! What's THAT all
about???!!!!
Well, what it is all about is my little statement for whatever it is worth on one of the most
iconic motorcycles, that if you have been and are involved with motorcycles in any way,
shape, or form, you know all about the Captain America bike from the 1969 movie
'Easy Rider.' I'm not real big on the chopper scene, especially for having only been
involved in selling parts and accessories for them back in the mid '70s, so I can't and
won't even try to impress you or bore you with all of the technical details of the bike.
Cuz I don't know 'em, except for the fact that it is a Harley Davidson Panhead, or at
least the motor is. This is just my little 40th Anniversary present to what I considered
to be one of the best movies and statements on how messed up the times were in those days.
Hell, you had Nixon, Viet Nam, soon to be Watergate, and the draft. Which in and about
itself caused more strife on this country-and others-to screw up several generations behind
it's mess. About the only good thing going at the time was NASA and the moonshot, and
a release in cinema. The movie 'Easy Rider' did one of the best jobs of any movie in any
time period of shoving the mirror in front of people's faces--the man!--and showing them
how screwed up they are and were and how it effected the other people around them and
how like a disease it grew until it was medicated, or stamped out.
Anyway, that's enough of my rant on the days of Turn On, Tune In and Drop Out, I just wanted
to showpiece a motorcycle that has affected a lot of people's lives over the years and decades,
in one way or another, as it sure did me. The statement that Peter Fonda, Jack Nicholson and Dennis Hopper made with 'Easy Rider' and Captain America was one that should and will be remembered for years to come. The motorcycle itself made a statement of the free birds and souls that travel the country in search of what it is and what it was. And what it will be.
I took the shots of this jewel at Barber Museum in Alabama during the AMA Road Racing
weekend in April of 2007. This is supposedly one of the originals, that was in crates when
George Barber and his people got a hold of it. I'm not sure if they restored it or if the crates
part was an urban legend, so I won't purport to know those details, either. Hell, they
probably had a sign next to it that said but I was so awestruck and enamored with it--and the
rest of the museum, as well (it was like crack to an addict, man.....)--that I never paid any
attention to that. It just brought back some good memories of some weird growing up times
that was something my dearly departed Dad and I had shared in seeing the movie back in '72
and how special those times were to me. And when you're 15 and your Dad takes you to see
'Easy Rider' it made it even cooler. We had a good time that night! And saw a great flick that
featured what I consider to be one of the all time iconic motorcycles in anyone's world.
I hope you agree, and if not, at least you have to appreciate how sweet this thing is.....for
what it is.....an 900 lb. piece of rolling lead that may turn around in a truck stop parking lot
and will hammer your hemoroids until the second coming of the......oh, never mind. For
what it is it really is a pretty slick piece.
http://en.wikipedia.org/wiki/Easy_Rider
http://www.imdb.com/title/tt0064276/
http://www.youtube.com/watch?v=in5uA5YXHIg
Posted by Stuman714 in Indy at 7:25 PM