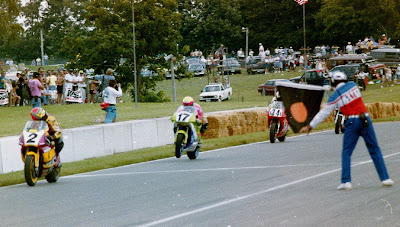 Scoring a motorcycle road race before the days of transponders used to be a lesson in Chinese arithmetic. Let alone if the road race was longer then 45-50 minutes, you were in for a long, drawn out day if you were in the scoring stand with your stock of legal paper and #2 pencils.
Times have changed in the last decade and a half, and most racing series now supply transponders to each participant's ride to help insure good, let alone, timely results for each event.
Yesterday at Road Atlanta in the AMA Superbike race one final saw a situation where a rider-Josh Hayes on the #4 Team Graves Yamaha YZF-R1 in this case-was deemed to have jumped the start and was thusly shown the meat ball flag. Hayes was just rolling through the pits for his ride-through penalty when the red flag was thrown for a crash on track, and it took some time AFTER the race was re-started, run and finished, before the results of this race were finally deemed 'final' due to a breakdown in the technological processes of the timing and scoring department.
Without coming off as a rant here, I want to mention that from what I have read so far, the AMA did a good job in the end of handling the issue, but the issue definitely lacked some forward thinking on their part in that it wasn't resolved in between red flag and re-start. And that was where the problem played out in that, in this case, Hayes was allowed to re-start from the front row based on his position on the most previous 'full lap' as completed by the field. But the problem was that the meat ball flag and subsequent ride-through weren't factored in properly for the re-start.
SpeedTV.com's Chris Martin covers the AMA Pro Road Racing series and has done so for several years. Beside the fact he's from my old hometown of Iowa City, Iowa, Chris has a great inside line and perspective of what the racing is really all about and what the fans want to see. And not. And in this case, to go home thinking you have seen the winner when in fact long after the outcome of the race has been decided that the results are adjusted due to some type of error or penalty or scoring anomaly on the track. That is what happened at HotLanta yesterday and Blake Young on the #79 Team Yoshimura Rockstar Makita Suzuki GSX-R1000 was declared the winner a little over an hour after the race and ceremonies were completed.
So to better point out what should have been as opposed to what was, I'll let Mr. Martin explain the various methods that could have better led to a more proper outcome for the racers, fans, and in this case, Blake Young, who as a result, had his first win the premier series handed to him long after the podium celebration champagne spraying was mopped up.
Great story and explanations by Chris on this subject, as there are clearly no winners when this type of situation is missed or mis-handled, and this is why I am trying to be as objective as possible with this AMA error due to the fact that they really have been trying to display an air of 'let's all just get along' in their running of the series this year after the sheer mockery they made of it last year. Read on and decide for yourself: