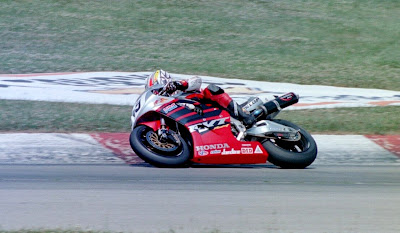 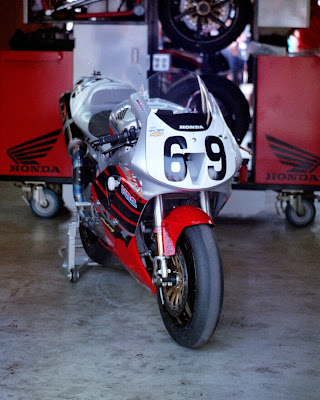 The #69 RC51 Team Universal Honda of Nicky Hayden sits in the garage area at Mid Ohio in 2001. The big twin saw 23 total AMA Superbike Series wins from '00-'03 at the hands of Nicky, his team mate #17 Miguel Duhamel (who also won the '03 Daytona 200 on one) and with Kurtis Roberts on the #80 Erion Racing RC51. The bike also garnered the 2002 World Superbike Championship at the hands of Colin Edwards on the Team Castrol entry.
-------------------------------------------------------------------------------------------------
With the Motegi round of MotoGP being pushed back until the first weekend in October due to the volcano in Iceland disrupting world travel, the riders had another week to prepare for the Jerez round in Spain scheduled for April 30-May 2. The folks at Indianapolis Motor Speedway put together another teleconference today that involved '02 AMA Superbike Champ and '06 MotoGP Champion Nicky Hayden.
Being in familiar territory and around voices and faces he has been comfortable with for years, Nicky was in a pretty kicked back mood and discussed his brother Tommy's first premier class win at Fontana a few weeks ago, the great weekend coming up in August in Indy, and a little bit of flat track talk slipped in as well. And he even said a few great words about The King and the TZ Miler retro ride from last year. Good reading!
Thanks to Dean Adams over at SuperBikePlanet.com for the link to the press conference with Nicky and the IMS team.
Stu's Shots can't wait for the Indy round of MotoGP in August. It's going to be a great weekend of speed, racing and having fun with fellow race fans!
Read and RIGHT on:
http://superbikeplanet.com/2010/Apr/100421nickhaydenims.htm