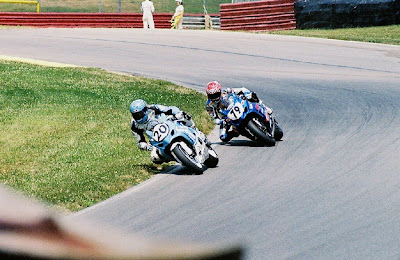 The write-up on the finish resolution can be read here thanks to Dean Adams at SuperbikePlanet.com, who reportedly is one of five media journalists on-site this weekend in the red clay state of Georgia.
Although this may seem out of line to what the DMG folks have been trying to do to turn the running of the series around this year after last year's debacles, the review was explained and it sounds like mistakes in timing and scoring were what actually factored into the decisions in initially giving the win to Hayes. Even Josh commented in the press conference how he thought that a mistake was made and he was taking advantage of that error:

Here is the final rundown on the penalty and outcome of race one at HotLanta today penned by the original Henny Ray Adams over at CycleNews.com. This further explains the outcome and the reasoning for the change.
Congrats to Blake Young on his first AMA Superbike race win! I'm sure it's the first of many to come on this team and with Mat Mladin's former crew chief Peter Doyle in charge and Blake twisting the throttle there most likely will be MANY more.
Read on: