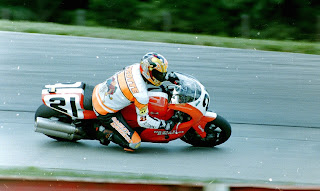 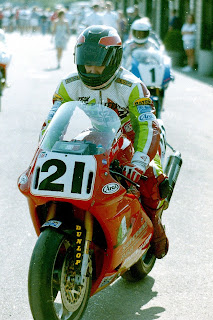 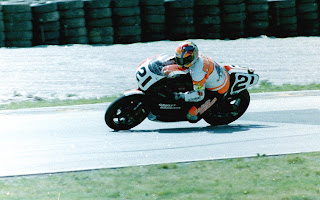 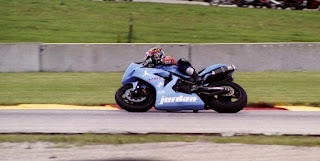 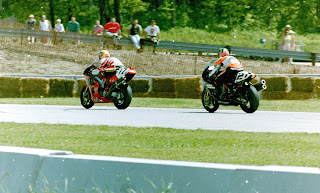 Two-time Canadian Superbike and Canadian 600 National Series Champion Pascal Picotte has announced that he will help support young up-and-coming Canadian racer Brett McCormick for a run at the AMA American Superbike series in the upcoming season.
In what should be a show of top flight equipment, it sounds like Pascal's Picotte Performance Motosport racing shop will be helping in the set-ups of the Suzuki GSXR-1000's the team will be fielding, and Pascal will be helping out as a rider coach to the young, but very fast Mr. McCormick. Last season Brett managed to place second in the points in both the Canadian Superbike and 600 National Series behind seasoned veteran Jordan Szoke. Pretty impressive considering he didn't turn 18 until August.
Pascal can be best remembered as National #21 when he was riding here in the States. Having ridden for Fast By Ferracci Racing, Team Yoshimura Suzuki, Harley Davidson's VR1000 road racing team, as well as for Michael Jordan Motorsports in it's first season of AMA racing, he is well traveled and has a wealth of wins, championships, and knowledge under his belt over the years. Some of the highlights of his career include an AMA Superbike win at Road America in '94 for the Ferracci team as well as his two Canadian Superbike and 600 National Championships in '03 and '04.
Here is the official release thanks to the great folks at http://www.roadracingworld.com/. John and his people do a great job getting the news out and we thank them for the news link:
http://roadracingworld.com/news/article/?article=39439
This is an article I found 0ver at http://www.moto123.com/ that talks about Pascal's and Brett's relationship and team from last year in the Canadian series and we appreciate the work these folks put in to get this info out to us:
http://www.moto123.com/motorcycle-news/article,Pascal-Picotte-and-Brett-McCormick.spy?artid=109347&pg=1
Here is a link to the official Canadian Superbike Series that Brett and Pascal concentrated on during the '09 season:
http://www.cdnsuperbike.com/index.php
.....and last but not least the official link to Pascal's dealership and race team shop:
http://www.picottemotosport.com/en/index.spy
While you are filling yourself in with all of the details of this great news to come across the pipe and help fill the field even more for the 2010 season, I'll fill you in on the shots for today's post.
First up is Pascal 'The Jester' on the Harley Davidson VR1000 at Mid Ohio during qualifying for the '98 race weekend. Then we have a shot of Double P on the Fast By Ferracci Ducati 888 at Mid Ohio in '93 just before practice in the paddock area.
Next up is another shot of PP on the VR1000 at Road America, just coming out of turn 8 during qualifying for the '98 race weekend. And then we have another shot of #21 at Road America on the Michael Jordan Brand Motorsports/Jumpman23 Yamaha YZF-R1-based Super Stock machine while practicing in superbike trim for the '04 weekend. This was Michael Jordan's first season in AMA Road Racing, and Pascal was riding Yamaha's in the Canadian series that year so this was a good barometer of how the bike was for the Jordan team. After qualifying in 13th spot some 5.3 seconds off the pole speed, Pascal was running in the top 7 or 8 and ran out of fuel in the standard, non-endurance style fuel tank, had to pit for fuel and still came out and finished 14th in race one. This was shot in turn 14.
And to finish off Stu's Shots post for the day is Pascal on the #21 H-D VR running with Miguel Duhamel on the #17 Team Honda RC-45. This was shot as they were just coming out of turn 8 at Road America right before they go under the bridge and into the carousel during qualifying for the '98 race event.
Thanks for coming by to check out the good news for today and we hope you'll want to drop by again. Less then two weeks to Daytona and less then eight days for the World Superbike series to fire up. Can't wait! How bout you? We need some racin' to get the blood warm again!
Posted by Stuman714 in Indy at 3:52 PM