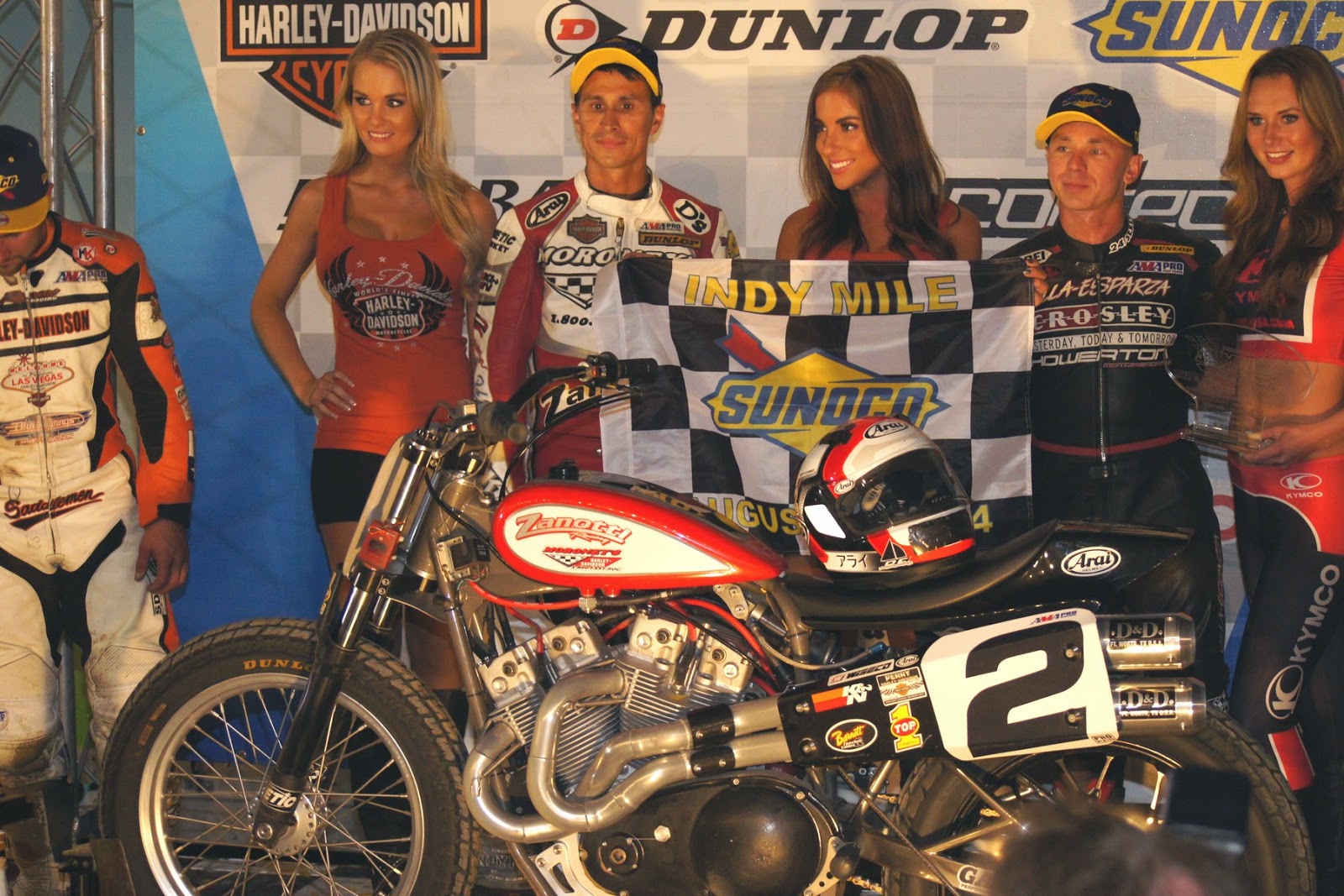 As was announced earlier this week, Family Events, the promoters of this year's Indy and Du Quoin Mile races on the 2015 AMA Pro Flat Track Grand National Championship calendar, now has tickets on sale for the legendary Indy Mile, scheduled this season for Saturday, July 11.

One of the greatest venues to hold an AMA Grand National, the Indy Mile has been on the series schedule for the better part of over 45 years, only missing from the calendar from 2001-2007 (Formula USA hosted the Indy Mile round in mid-May of 2000, but the major part of the racing program was called due to rain.) Some of the famous people who have won on the Indiana State Fairgrounds mile oval include David Aldana, Gene Romero, Ricky Graham, Scott Parker, Jay Springsteen, and probably the most well-known win by Kenny Roberts in 1975.

In the shot above, Jared Mees, winner Kenny Coolbeth, Jr. and Bryan Smith celebrate on the victory podium after Coolbeth had taken his #2 Zanotti Racing/Moroney's H-D/Burt Ives Honda-sponsored Harley-Davidson XR750 to the win in front of a crowded house during the Indiana State Fair weekend in Indy at round 11 of the 2014 AMA Pro Flat Track Grand National Championship on August 8.

Family Events again will be promoting the Indy event for what will surely be a stellar weekend in the Circle City, this time without running in tandem with the Indianapolis Red Bull MotoGP just down the road at IMS. Due to a scheduling conflict, the Indy Mile will now run the weekend after the Du Quoin Mile, also being promoted by the fine folks at Family Events, in southern Illinois on July 4. Indy's new date of July 11 should actually prove to be even better for the casual or even hardcore fans as there won't be as many racing conflicts or time constraints to keep people from missing any of the fast-paced action on the Indiana State Fairgrounds mile oval. And ticket prices for Indy are lower than ever, with extra special pricing for the kids and special VIP prices for the ultimate fans that want to experience the over 125mph speeds at Indy in an even more spectacular way. You can't and won't beat any of the action happening at Indy on July 11!

Check out the full press release below from the great group of people at Family Events, and get your tickets now for what will be another barn burner of an event at the legendary Indy Mile. Let's go racing!