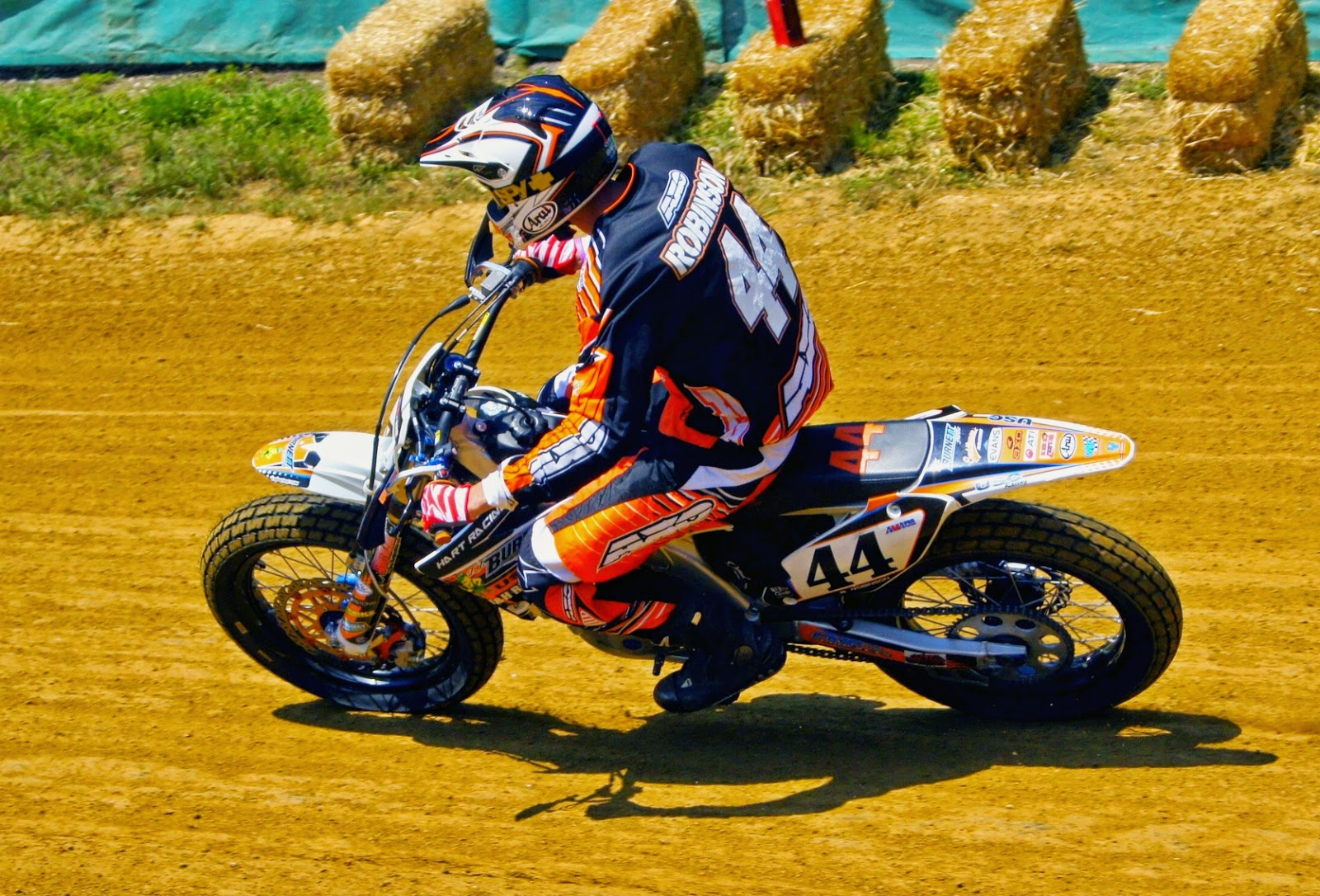 2008 AMA Pro Flat Track Pro Twins Champion Brandon 'BRob44' Robinson started off the 2015 AMA Pro Flat Track Grand National Championship season with a bang earlier this month and was able to bring his TJ Burnett Farms-sponsored Honda home for a 4th-place and 2nd-place finish in the season-opening rounds at the Daytona Short Track.

Robinson, who had switched back to the TJ Burnett Farms team late last season after struggling early in the season on the USC/Hart Racing Kawasaki team, helped to repay his previous season boss by getting such a strong start to the new season. Robinson will campaign this year's Singles Series events aboard big man Burnett's superb Hondas, while he will campaign the Twins Series events as the new member of the Latus Motors/Castrol Oil Racing team headed up by former 2000 AMA Grand National Champion Joe Kopp.

In the shot above, BRob44 gasses it up on the #44 TJ Burnett Farms/USC Racing/James Hart Racing-sponsored Kawasaki KX450F during the final qualifying session at the Peoria TT during round 7 of the 2013 AMA Pro Flat Track Grand National Championship season on August 11.

BRob has his work cut out for him in the Twins Series events this season, but no more than any of the other riders including Johnny Lewis and Kopp who have tried to get the Latus Motors Triumph up to snuff in the ultra competitive Rolling Thunder Show. In what will be the third year for the team, Robinson just could be the man to make the slogan 'third time's a charm' come true for the Northwest Territory-based team.

Check out Brandon's press release below as he fills us all in on testing before the Daytona rounds and how he got through Daytona with such a fine set of finishes to kick off the 2015 season with a big jump start. As always, we wish the tall man the best of luck this year and look forward to seeing him get the Latus Motors Triumph up on the podium and the TJ Burnett Farms Honda back in the winners circle again this year. Go get 'em guys!

It sure is crazy to believe another Daytona has already come and gone!  Just like every year I’m pretty ramped up for the beginning of the season and this year was no different.
This offseason I had a pretty big overhaul to my entire program from switching brands of motorcycles to having a new crew chief.  One thing I was really excited about was getting the chance to finally ride the Latus Motors Castrol Triumph.  We had some ups and downs throughout testing, but in the end we had a productive test where I was able to get a good feel for the Triumph.  Overall I’m pretty excited and after being able to get some laps on it I feel like the potential is there to have some good results. 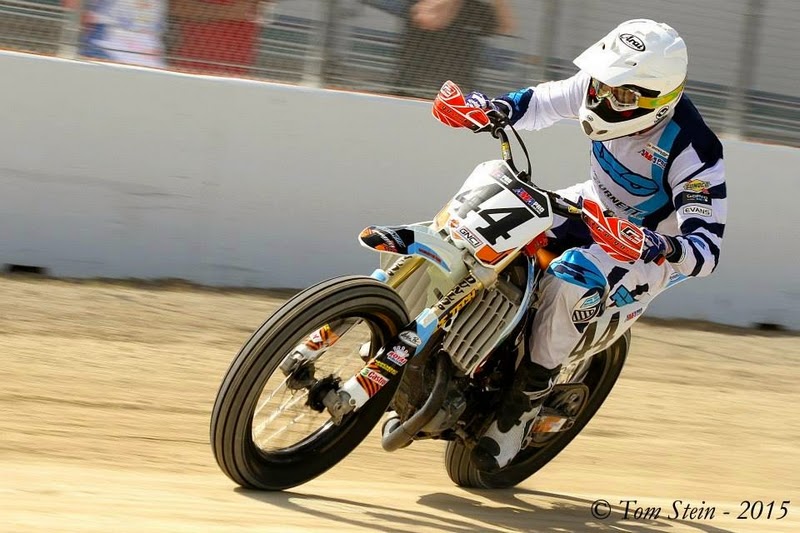 Brandon Robinson is shown on the #44 TJ Burnett Farms Honda during Bike Week festivities in early March. Photo courtesy of Brandon Robinson by Tom Stein/Northwest Track Shots.
Once all of our big bike testing was done we focused on getting ready for the opening rounds of the AMA Pro Flat Track Grand National Championship at the Daytona short track.
The last couple years have been very good to me at Daytona so my confidence was high that we could get the job done once again.   It was an amazing feeling to come out swinging right off the bat as we were fast right off the truck where we ultimately qualified 3rd overall.  With the track developing a single racing line it made for an extremely tough track to pass on, as I found out with a bad start in my heat race that would put me on the second row for the main event.
In the main I got as good of a start as I could from the second row and from there I methodically worked my way forward for a 4th place finish.  Not a bad start to the season!
Night two started off a little slower as I only mustered 11th overall in timed qualifying.  AMA decided to water the track more frequently, which made the track really slick and this definitely benefited my riding style.
The heat race went much better on night two as I was able to get out front early and run away with the win.  The best part was setting fast time and then we were able to go out and rip off the win in the Dash for Cash.  It was great to get that extra point towards the championship and at this point I felt ready for the main event.
Then the track crew watered it right before the main making the track the slickest we had seen all night.  As the green light flashed in the main, I got off to a good start and was able to work my way to the lead by the beginning of lap two.  However it was short lived as Coolbeth got by me pretty much as soon as I took the lead and he continued to pull away until the finish.  I tried everything I could, but we were no match for him and I ended up bringing her home in 2nd place. 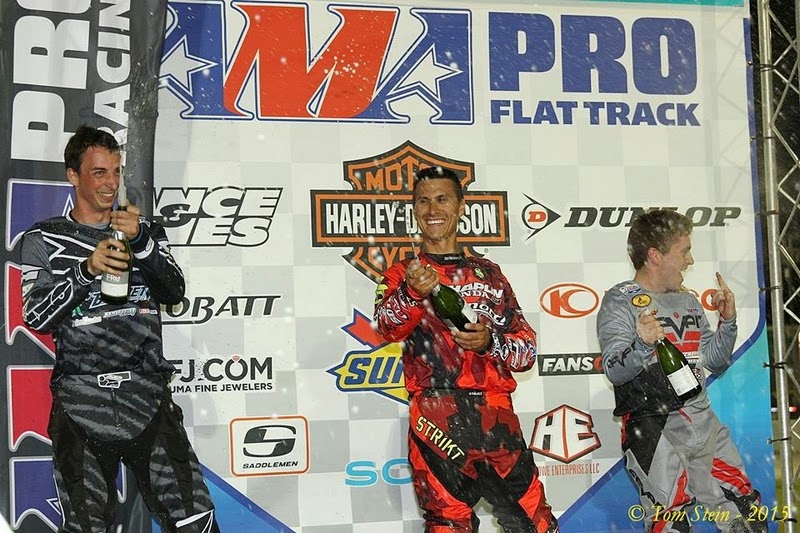