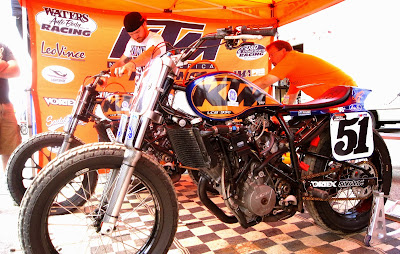 The Albion, NY-based team will be in it's 5th full season of campaigning the KTM 950/990 LC8 platform, one of AMA Pro Flat Track's front runners in terms of diversity. Utilizing a handful of riders in their first four seasons of operation, the team has made some big strides along the way in terms of making National mains on a semi-regular basis, but has yet found the right combination of talent to guide them towards the front in terms of making mains on a regular basis, although not for lack of trying.

The team probably came closest to it's best finish of their young life this past season with the pairing of rider Rob 'Bugs' Pearson #27 at the Virginia Mega Mile. Pearson had the team's bike, through a joint one-off partnership with the Iowa-based Weirbach Racing squad, in the top-10 before falling out within the last lap of the race as the fuel-thirsty big twin came to a stop just before the completion of the National main, where he eventually finished in the 16th-place slot.

In the shot above, taken in the team's pit area prior to the first practice session at the Indy Mie on August 17, team owner and patriarch Dave Waters makes some fine-tuning adjustments to Mick Kirkness' #87 KTM North America/GE Capital/Waters Auto Body 990 LC8 as Kirkness blips the throttle. The team utilized Kirkness as their second rider in his brief return to the States and the series at the Indy and Springfield Miles, alongside regular rider Steve Murray #51, who has campaigned the WAB KTM's for the team the last two seasons. 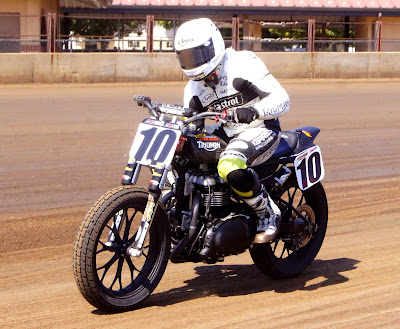 Lewis, who won his first AMA Pro Flat Track Grand National Championship race at the Daytona Short Track I in March 2012, should be a very welcome addition to the NY State-based team with his well-rounded personality, his ability to help in bike set-up and development, as well as his strong internet-based following and fan-friendly personality. Along with his seat time on the Scott Powersports Kawasaki team during the 2010-2011 and partial 2012 seasons, JL10 has shown his ability to run at the front in The Rolling Thunder Show on a variety of equipment.

One of his most recent outings at Springfield over the 2013 season saw Lewis aboard the #10 Latus Motors Racing/Triumph Motorcycles/Castrol Oil-backed 955 mount (shown above after the first practice session of the Springfield Mile I on August 31), and then putting in time on a Harley-Davidson XR750 and Suzuki 1000 over the course of the weekend at the Illinois State Fairgrounds after suffering a multitude of mechanical problems on each of the machines.

Lewis never seemed to come to complete grips with either the Latus Motors Triumph or the workings of the team during the 2013 season for whatever reason, and ended the season ranked in the 17th-place spot after finishes of 8th-place at Virginia and 10th-place at Pomona as his best outings on the year. 2014 should usher in a brand new vitality to not only JL10's great ability on the track, but the KTM North America/Waters Auto Body team as well, and should be able to help elevate the 'little team that could' to that next step to help them achieve the needed, and deserved results that they have been shooting for.

You can check out the full press release below, courtesy of Dave & Rhonda Waters, KTM North America/Waters Auto Body Racing and JL10, and we wish the team and one of the series' most popular riders the very best of luck in the upcoming season!

Coatesville, PA ( Dec. 23rd 2013) -- With a new year and a new season just around the corner, the Waters Autobody/Project K Racing team supported by KTM & GE Capital announces their partnership with National #10 Johnny Lewis. Lewis, a former Factory KTM Supermoto racer with 8 career podiums and a win in the AMA Pro Supermoto Unlimited class, has joined the Leo Vince supported team on the KTM powered 990 V-twin for the AMA Pro Flat Track Twins Championship in 2014. Lewis has opted to not re-sign with the Latus Motors Racing Triumph program for a second season, where the season’s best result came at Virgina’s Colonial Downs Mega Mile with a second place Dash for Cash finish and an 8th place finish in the main event after coasting to the finish line with engine issues. The 2012 AMA Pro Flat Track Daytona winner is excited to help Project K Racing owner Dave Waters further develop the KTM 990 and hopes to bring it to the next step with a first-ever podium finish in the AMA Pro Flat Track Twins Championship next season.

“For me it’s really exciting to be back on the KTM brand. From riding supermoto for KTM at the beginning of my racing career, to now riding one in the AMA Pro Flat Track Singles and Twins Championships. KTM has always been special to me. I love the bikes, the brand, and the image KTM represents. I want to bring KTM their first AMA Pro Flat Track Twins podium in the history of the sport”, stated Lewis. 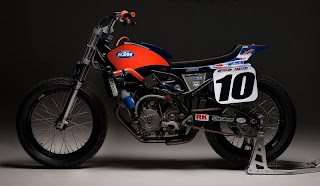 The KTM North America/Waters Auto Body/GE Captial KTM 990 LC8 is shown in a display photo with Johnny Lewis' #10 on the side plate in a promotional shot courtesy of Waters Auto Body Racing/KTM North America. JL10 will be joining the team for the 2014 AMA Pro Flat Track Grand National Twins Championship season starting with the first round at the Springfield Mile I over the Memorial Day weekend.


The Saddlemen Performance/Silkolene/K&N supported Project K Racing team, owned and managed by Dave & Rhonda Waters, stated, “When we heard Johnny Lewis wasn’t returning to the Triumph team we discussed the possibility of him riding for us this year.  We felt that his natural talent and experience would be just what our team was looking for in 2014.  The fact that he is riding a KTM in the Expert Singles division, along with his teammate Ryan Wells in the Pro Singles division,  makes him a great spokesperson for KTM. Johnny has a great marketing approach that we know will benefit our current strategy. We think with what Johnny brings to the table, this will be a win-win for our program.”

Lewis, who hails from Pennsylvania, will line up for the 2014 AMA Pro Flat Track Expert Singles Championship rounds on a Solid Performance KTM 450 SXF. “Solid Performance KTM is a new KTM dealership located 5 miles from my house that is supporting my AMA Pro Flat Track Singles program. I actually work at the dealership, so my connection with the brand goes that much further”, says Lewis. March 14th & 15th marks the opening round for the AMA Pro Flat Track Series. Johnny Lewis and his wife Alysha are expecting the arrival of their first child with a due date of March 1st. This may make the Lewis’ attendance in Daytona questionable. “I’m so thankful to have a team and supporters behind me that support my decision to wait to commit to the opening rounds of the series. Our decision will of course be based on the well-being of my wife Alysha and soon-to-be newborn baby boy. Family comes first for me and the team understands that.” says Lewis.