DAYTONA BEACH, Fla. (December 4, 2013) - Officials from AMA Pro Racing announced today the future plans for the AMA Pro Road Racing class structure and rules package. The changes, which are planned for the 2015 AMA Pro Road Racing season, are being made with the goal of fostering a cost-effective and competitive racing platform for America's premier motorcycle road racing series. 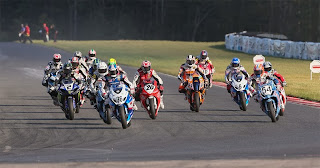 Martin Cardenas on the #36 Yoshimura Factory Suzuki GSX-R1000 leads the field during one of the AMA Pro National Guard SuperBike races at New Jersey Motorsports Park during the 2013 season. AMA Pro Road Racing announced on December 4 new changes planned for the class structure and rules packages that are being planned in advance for the 2015 season. AMA Pro Road Racing photo by Brian J. Nelson.
"These long-term, strategic moves have been planned with careful consideration and after many conversations with our motorcycle manufacturers, teams, riders and event promoters," said Michael Gentry, Chief Operating Officer of AMA Pro Racing. "We feel that these changes will help us elevate the sport of professional motorcycle racing in North America to greater heights."
AMA Pro Racing will further refine the Series' tiered performance structure comprised of production-based classes. The performance characteristics of the motorcycles raced in each division will be configured so as to provide appropriate platforms for riders to compete and hone their skills as they climb the ladder to the premier AMA Pro SuperBike division.
AMA Pro SuperBike will be entering its 40th year of competition and will once again be featured as the headlining class for the Series. Following consultation with both World and National Superbike championship governing bodies, incremental changes will be made to the technical rules package over the next two seasons in the interest of rule commonality, performance parity and cost containment.
Equally as important to the class restructuring, the 2014 SuperSport season will be reconfigured as an overall National championship; the class will no longer be separated into East and West divisions. In 2015, a consolidated middleweight category will be established by combining the AMA Pro GoPro Daytona SportBike and AMA Pro SuperSport classes.
To complete the progressive class structure in 2015, AMA Pro Racing is investigating the potential of adding an entry-level division showcasing the smaller-displacement machines which are currently in large demand in showrooms across North America. The Vance & Hines Harley-Davidson Series is planned to enter its sixth season as part of the AMA Pro Road Racing class structure in 2015.
The 2014 AMA Pro Road Racing season will kick off once again at Daytona International Speedway. The event is scheduled for March 13 - 15, 2014 and will have the same three-day format featured in recent years, highlighted by the 73rd running of the DAYTONA 200 on Saturday afternoon.
For tickets and information, please visit http://www.daytonainternationalspeedway.com.
About AMA Pro Road Racing:
AMA Pro Road Racing is the premier motorcycle road racing series in North America and is universally regarded as one of the most competitive road racing organizations in the world. Learn more about AMA Pro Road Racing at www.amaproracing.com/rr/.
Posted by Stuman714 in Indy at 8:41 PM