PICKERINGTON, Ohio -- December 17, 2013 -- In a move that will help Midwestern motorcyclists get more out their summer events, the American Motorcyclist Association and Mid-Ohio Sports Car Course have worked together to change the date of the 2014 edition of AMA Vintage Motorcycle Days, the country's premier celebration of vintage motorcycling.

AMA Vintage Motorcycle Days 2014 will be held July 11-13, one week earlier than previously announced. The new dates prevent a conflict with another event held in Wauseon, Ohio.

"Providing a date for AMA Vintage Motorcycle Days is never easy, given that it often can only be set after many other dominoes get lined up, including schedules for MotoGP racing in this country, World Superbike races here, and AMA Pro Racing events," said Jeff Massey, AMA vice president of operations. "We never like to wind up in competition with other motorcycling events nearby, and some years it's unavoidable. But in this case, we were able to work with other groups in an effort to find a new spot on the calendar for AMA Vintage Motorcycle Days that makes the most sense for the fans."

"It wasn't easy getting all the dominoes to fall the right way, but in the end, this change will be received well by the fans of AMA Vintage Motorcycle Days," Massey said. "By changing these dates, we create the opportunity for a better fit in the mix of motorcycling attractions in the region next July." 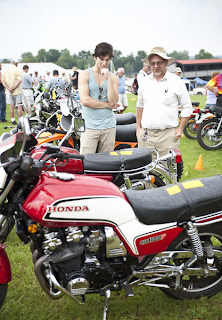 Spectators enjoy a variety of motorcycles during the 2013 AMA Vintage Motorcycle Days at Mid-Ohio, including this pristine 1983 Honda CB1100F. Photo courtesy of the American Motorcyclist Association, by Yve Assad/The Fast and Dirty.com.
Said Mid-Ohio Sports Car Course's President Craig Rust: "We're happy to work with the AMA and AMA Pro Racing to come up with a reformatted schedule that we believe will benefit everyone, including the great fans who support these events."

Advance tickets are available to the general public at www.midohio.com. In addition, AMA members should stay tuned for news of a special ticket discount only for AMA members available directly through the AMA offices.
About the American Motorcyclist Association
Founded in 1924, the AMA is a not-for-profit member-based association whose mission is to promote the motorcycle lifestyle and protect the future of motorcycling. As the world's largest motorcycling rights and event sanctioning organization, the AMA advocates for riders' interests at all levels of government and sanctions thousands of competition and recreational events every year. The AMA also provides money-saving discounts on products and services for its members. Through the AMA Motorcycle Hall of Fame in Pickerington, Ohio, the AMA honors the heroes and heritage of motorcycling.
For more information, visit www.americanmotorcyclist.com.
Media contact: Grant Parsons
Phone: (614) 856-1900, ext. 1199
E-mail: gparsons@ama-cycle.org
Posted by Stuman714 in Indy at 8:05 PM