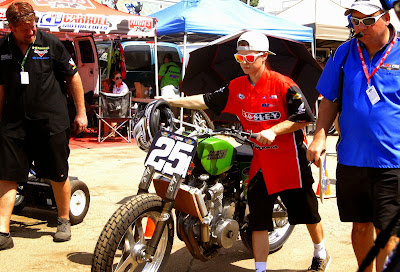 An announcement last week hit our inbox as Cory Texter, AMA Grand National #65 is set to return to The Rolling Thunder Show of AMA Pro Flat Track in the upcoming 2014 season aboard a Racing Unlimited Kawasaki.

Texter, and multi-year Expert, sat out the 2013 season after starting the year competing in the AMA Pro Road Racing Vance & Hines Harley-Davidson Series riding a MOB Racing XR1200. As it turned out, CTex ended up only competing in the Daytona and Road Atlanta rounds, with a best finish of 13th-place at Road Atlanta and ending the season ranked in the 29th-place position in the standings.

Cory will be riding one of Alan Rodenborn's potent Racing Unlimited Kawasakis in the Expert Twins Series class, in what will be similar equipment to what his sister, Shayna, stole the show with at the Springfield Mile I & II doubleheader rounds over the Labor Day weekend.

The team is based out of Fort Dodge, IA., and had originally aligned itself with the Ottumwa, IA.-based Weirbach Racing team, but due to the length of time it took to get the bright green Kawasaki EX650-based mount wrapped-up for track purposes, the Weirbach team was forced to compete aboard their tried and true Suzuki SV650 and Harley-Davidson XR750 with new signee Rob 'Bugs' Pearson for the better part of the year. Pearson did get to ride the bike at the Pomona Half-Mile season-finale and finished in the 8th-place spot in the National main.

Texter will also be aboard Lancaster/Engelhart R&T Honda CRF450Rs for the four Singles Series events on the series' schedule for the upcoming season.

Check out the full press release below from CTex, and join us in congratulating Cory on his return to AMA Pro Flat Track competition for the upcoming season. It will be great to see him back at it again in the best racing series on two wheels in the world, and aboard what we all know is a potent machine in the Twins Series events.


Fort Dodge, IA (12/4/2013) - After a year off from the Grand National series, Cory Texter will return to the AMA Pro Flat Track series in 2014 with the Racing Unlimited Kawasaki Team. Texter will be aboard a Racing Unlimited Kawasaki in the GNC Twins Class and Honda 450's with support from Lancaster Honda in the GNC Singles Series.
Texter took the year off from the dirt in 2013 and raced a limited AMA Pro Road Racing schedule in the Vance & Hines Harley-Davidson Series. Texter had two top-15 finishes at the Daytona Beach and Road America rounds of the series. In addition to racing in the AMA Pro Road Racing Series, Texter also raced in three rounds of the AMA All-Star Series. He had three top-5 finishes along with two podiums. Texter is also a past multi-time amateur national champion and basic expert twins winner.
"I am really excited to have something in place for next year so early in the off-season and with a great team to boot," said Texter. "I wasn't going to do this unless I was riding for a team who believed in me and on a bike I felt was capable of winning. I feel I have a lot to prove yet on the dirt. Not to my competitors, sponsors, or even my fans, but to myself. I feel like I always had the ability to compete up front and win at this level, but I just lacked confidence and a good program since my Dad passed away. I have a lot of confidence in myself and the motorcycles I am riding next season. Now it's up to me to twist the grip and make it happen." 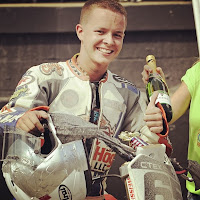 Cory Texter, AMA Pro Flat Track Grand National #65. Photo courtesy of Cory Texter/DAO Apparel, by Dave Hoenig/Flat Trak Fotos.com.
Racing Unlimited is a Kawasaki "Team Green" dealership, in Fort Dodge, Iowa. 2014 will mark their 21st year with the brand synonomus with performance. They also carry the Victory and Polaris lines.
Alan Rodenborn, Owner of Racing Unlimited, has a strong racing background on the asphalt side of motorcycle racing. His machines have won several "Battle of Twins" national events, as well as three national titles. He has found early success in his transition to the dirt, as Shayna Texter won back to back AMA Pro Basic Twins races on a Racing Unlimited Kawasaki, at the 2013 Springfield Mile. Alan is also a supporter and sponsor of the Weirbach Racing Team with #27 Robert "Bugs" Pearson as the rider.
"Cory's passion for racing is really contagious", said Rodenborn. "His trackside manor, dedication and insight, impressed me when we first met. We have a new chassis combination for 2014 that will really suit Cory's talent and style."
Texter will be riding a Honda 450 in the GNC Singles Class and at the AMA All-Star Events with support from Lancaster Honda and Englehart R&T. Additional sponsors to the program will be announced in a future press release.