AMA Pro Flat Track released the schedule today for the 2014 AMA Grand National Championship season in what is the earliest release of the series' schedule for the last four seasons.

The Rolling Thunder Show, the greatest racing series on two wheels in the world, will again be returning to several of the major venues that have become and become to be known as some of the epic events on the series' stops along the yearly tour.

Springfield, Indy, Peoria, Lima, Hagerstown and Pomona are among many of the returning venues that will include the season kick-off at Daytona in mid-March. Springfield will again feature it's Memorial Day and Labor Day weekend thrill-athons, Hagerstown will be the first race in July, this year being held July 4th weekend on Saturday, July 5, and Pomona will for the fourth time in the last five seasons host the season-ending round of the series.

Also returning to the schedule will be an early June trip to Knoxville Raceway in Iowa, in what will hopefully see a good crowd show up this time as the series shares the track with the World of Outlaws at the venue known as the Sprint Car Capital of the World.

Colonial Downs Raceway in New Kent, VA., which hosted it's inaugural event during the 2013 season on it's massive 1.25 mile track, will also return to the schedule after a stellar sell-out crowd got to see what the best racing in the world is all about this last August. The Colonial Downs Mile will be the last race on the schedule before the series heads to the Springfield Mile II on August 31.

The Castle Rock TT again will host it's annual gathering in the Great Northwest, and AMA Pro Flat Track has given a big break to the promoters at Grays Harbor in Elma, WA. after they pulled out just nine days before the 2013 event. The series will also make a mid-week stop at the Sturgis Half-Mile during the big week in South Dakota on August 5.

And last but not least, both the Sacramento Mile and Santa Rosa Mile will be featured again in what will surely be a double dose of great action on the left coast as hosted by the Circle Bell Motorsports group headed up by one of the best promoters in the business, Bob Bellino.

In the shot above, JD Beach on the #95 TJ Burnett Farms/Red Bull Kawasaki holds the advantage over the rest of the pack during heat race #2 action at the Springfield Mile I, round 10 of the 2013 AMA Pro Flat Track presented by J&P Cycles Grand National Championship on August 31. Hanging tough on the outside of JD is Mikey Martin on the #91 Bonneville Performance/Factory Triumph Performance mount.

With a whirlwind of action going on behind them, Willie McCoy on the #59 H-D of Wausau/Independence H-D XR750, Mick Kirkness on the #87 Waters Auto Body/KTM North America 950/990, Dan Ingram on the #31 Brush/Eaken Racing/Dick Ford Kawasaki, Shawn Baer on the #32 Baer Racing Products/KB5 Kawasaki, Doug Lawrence on the #73 R&J Racing/CVC Communication Agency XR and Shaun Russell on the #28 Lloyd Brothers Motorsports/Ramspur Winery Aprilia all showing some serious levels of body English and hang-off styling as they work their way out of turn four to try and get the transfer spots into the National main over the Labor Day weekend at the Illinois State Fairgrounds. Ace photographer Brent Pierce/BTP Photography takes it all in along the guard rail.

A big bravo to the folks on Fentress Boulevard in Daytona Beach for eclipsing their previous schedule releases over the course of the last four seasons (by at least a week!) for getting the schedule out as early as they did this week. Great job guys!

You can check out the full listing of events and dates below in the press release from AMA Pro Flat Track, and get your calendars marked and ready for the 2014 AMA Grand National Championship season as it heads our way in just over three months time.

"We're excited to be announcing the 2014 AMA Pro Flat Track schedule today," said Michael Gentry, Chief Operating Officer of AMA Pro Racing. "AMA Pro Flat Track is America's original extreme sport, and we're looking forward to watching our riders thrill crowds across the country during another action-packed season of racing in 2014."
Of the 16 races scheduled as part of the 2014 AMA Pro Flat Track calendar, the GNC Expert Singles will compete at four of the rounds, broken down into two Short Tracks and two TTs, while the thundering GNC Expert Twins will contest the remaining 12 rounds, consisting of six Half-Mile and six Mile tracks. Fans can also expect to watch the sport's finest up-and-coming talent battle for fame and glory in Pro Singles races at the majority of the events.
On March 13 and 14, 2014, DAYTONA Flat Track will once again play host to the AMA Pro Flat Track opener as the series kicks off the 2014 season with a doubleheader on the quarter-mile lime rock track located just outside Daytona International Speedway's west banking. At the 2013 season opener in Daytona Beach, Fla., fans witnessed four riders claim their first career victories at the professional level in dramatic fashion.
Next up, the series will make its first annual stop in Springfield, Ill. for the Springfield Mile on May 25, 2014 and will return again to the legendary venue on August 31, 2014 for the second go-around. Last season, Brandon Robinson made his money at Springfield, earning two convincing victories in a crucial late-season doubleheader weekend.
The series will head to Knoxville Raceway in Knoxville, Iowa on June 15, 2014 for Round 4. Kenny Coolbeth earned a split-second victory at the Knoxville Half-Mile in 2012 over then defending champion Jake Johnson. After taking a break from the Marion County venue in 2013, the series is scheduled to return to Knoxville Raceway in 2014 to run in conjunction with the World of Outlaws STP Sprint Car Series and provide the same exhilarating action that it does everywhere else.
Round 5 of AMA Pro Flat Track will take place at the Allen County Fairgrounds in Lima, Ohio for the Lima Half-Mile on June 28, 2014. Dating back to 1984, AMA Pro Flat Track has made the trek to Lima to take on the pea-gravel circuit and the 2014 event should be another weekend filled with exciting racing.
It wouldn't be a normal 4th of July weekend without AMA Pro Flat Track racing in Hagerstown, Md. The series is set to roll out the thundering twin-cylinder motorcycles on July 5, 2014 at Hagerstown Speedway for the Hagerstown Half-Mile. Eventual 2013 Grand National Champion Brad Baker earned his first win at the GNC Expert level at Hagerstown last season and will look to have similar success following America's Independence Day in 2014.
The first west coast tour begins on July 19, 2014 with a Half-Mile event at Grays Harbor Raceway in Elma, Wash. The venue will serve as the first time that AMA Pro Flat Track tires will have touched this particular soil and the event will be hosted by a new promoter.
On July 26, 2014, the series will make its second west coast appearance at the famous Sacramento Mile in Sacramento, Calif.  Last season, Bryan Smith recorded his first of two wins on the year at the Cal Expo and the Flint, Mich. product will look to continue his success on mile-long tracks when the series returns to Sacramento in 2014.
The first TT event will take place at Castle Rock Race Park in Castle Rock, Wash. for the Castle Rock TT on August 2, 2014. Jeffrey Carver recorded his lone win of the season last year in AMA Pro Expert Singles competition as he crossed the stripe a little over a second ahead of second-place finisher and 2012 Grand National Champion Jared Mees.
Next up, the series heads to Black Hills Speedway in Rapid City, S.D. for the Sturgis Half-Mile on August 5, 2014, run in conjunction with the largest annual bike rally in the United States. Hundreds of thousands of motorcycle enthusiasts will flock to the 74th Annual Sturgis Motorcycle Rally and the timing couldn't be any better with the Grand National Championship coming to town in the midst of all the excitement.
The Indy Mile at the Indiana State Fairgrounds in Indianapolis, Ind., returns to the 2014 schedule on August 8, 2014 and the event will once again coincide with both the Indiana State Fair and MotoGP's state-side return for the Red Bull Indianapolis GP at Indianapolis Motor Speedway.
Next up is the second and final TT of the season, and the granddaddy of them all, scheduled for August 17, 2014 at Peoria Race Park in Peoria, Ill. Henry Wiles has owned the Peoria TT for nearly an entire decade and he will look to collect his 10th win at the Midwest venue next season. The Peoria TT has been a staple on the Grand National circuit since 1947 and still packs the hillsides with spectators eager to watch the high-flying singles takes to the track.
After a successful inauguration to the Grand National scene last season, Colonial Downs will host Round 13 of the AMA Pro Flat Track schedule on August 23, 2014. The 1.25 mile-long circuit, located in New Kent, Va., measures in as the largest track on the schedule and will surely provide for some thrilling racing action. 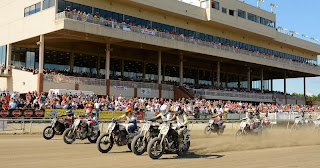 Bryan Smith #42, JD Beach #95, Jared Mees #1, Johnny Lewis #10 and Jake Johnson #5 lead the field in the start of the 18-lap National main at the inaugural Colonial Downs Mile in New Kent, VA. in August '13. The Rolling Thunder Show will return for a second outing at the beautiful facility in August '14 as part of the fight for the 2014 AMA Grand National Championship as was announced by AMA Pro Flat Track today. AMA Pro Flat Track photo by Dave Hoenig.
Following the second Springfield Mile event on Labor Day weekend, the season wraps up with two final bouts on the west coast with the Santa Rosa Mile in Santa Rosa, Calif. on September 28, 2014 and the Flat Track Season Finale on October 11, 2014 at the LA County Fairplex in Pomona, Calif. These two races proved to be critical at the tail-end of last season, as Brad Baker, Bryan Smith and Brandon Robinson were neck-and-neck going down the homestretch of 2013. In the end it was Baker who sealed the final victory at Pomona to cap off an amazing season and capture the coveted No. 1 plate.
Complete 2014 AMA Pro Flat Track Schedule
Posted by Stuman714 in Indy at 8:47 PM