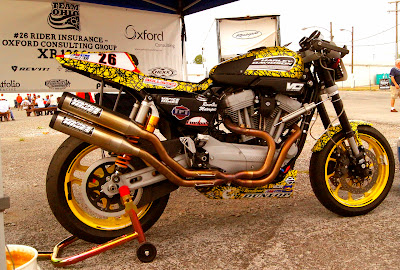 The #26 Team Ohio Racing/Oxford Consulting Group/RevZilla.com/RIDER Insurance-sponsored XR1200 sits on display at the Lima Half-Mile round of the 2012 AMA Pro Flat Track Grand National Championship on June 30.  Team owner and rider, Pete Cline, was on-hand to talk with the spectators about the program that the team has put together that allows members of the Wounded Warrior Project to work with the team during race events as part of the series and team's calendar.  The team hosted wounded veterans at several rounds of the 2012 AMA Pro Vance & Hines XR1200 Series throughout season in the Geico Motorcycle AMA Pro Road Racing Series.

With rider Cline still recuperating from off-season surgery, the team won't be participating in the season-opener of the now-rebranded 2013 AMA Pro Vance & Hines Harley-Davidson Series, but has worked out an agreement with a couple of prominent teams in the popular series to host members of the WWP at the Daytona round, which will be held on March 14-15 at Daytona International Speedway.  The Motolist.com and James Gang/Hoban Brothers Racing teams will each host two members of this great organization to help out their respective teams in the pits during the annual gathering at the 'Beach.'

Thanks to Pete Cline (who put this deal together at the Indy Dealer Expo last month) for the great news (and heal-up quick man!) and you can read all about it in Team Ohio Racing's press release below.  What a great effort for our wounded veterans!

3/4/2013 Upper Arlington, Ohio -- Team Ohio Racing’s / Veterans Empowered Through Motorsports will partner with two AMA Pro Racing Vance & Hines Harley-Davidson teams by working with combat veteran crews at Daytona International Speedway, March 14-15.  The number #3 Motolist.com XR1200 of Richard Barnett and the #70 James Gang/Hoban Brothers Racing XR1200 of Paul James will each have two combat veterans included in their crew.  These veterans are local to the area and part of the Wounded Warrior Project (WWP) Alumni.  They will assist as needed throughout the event.


"I feel very honored to have alumni from the Wounded Warriors Project on my pit crew at Daytona," said James. "And I can't think of anyone I'd rather have on my side than someone who has served our country in a time of need.  It's going to be an awesome experience for all of us to work together."


Barnett added, "I can't wait to work with the Wounded Warriors at Daytona in March. They will be an indispensable part of our crew.  I know that I speak for everyone when I say that we are all grateful for the sacrifices these Veterans have given to our country.  They always amaze me with their dedication, knowledge and attention to detail.”


United States Marine Corps combat veteran A.J. White crewed on previous XR1200 teams, and had this to say, “This will be an experience that the WWP crew will not forget for a long time, if ever.  The chance to get work intricately within a team environment, with so much on the line and with other veterans, is something they probably haven’t done since they were injured.  This is a great experience for any veteran; to immerse him or herself again into reliving those feelings of true teamwork, responsibility, and accomplishment as we experienced serving our nation together.”


Asked how this came together, Team Ohio Racing’s Pete Cline stated, “Richard posted up in the WERA forum that he was coming out from California.  He had mentioned after Indy last year that Motolist.com would love to put together a warrior crew.  I reached out to him and he thought Daytona would be great.  I then saw Paul at the Indy bike show and he asked if I was racing. I told him I’m still healing up from surgery and he asked about a crew as well.  So when the WWP connected with me Team Ohio Racing was able to put this together.  This is a tremendous opportunity and continues the outreach we had last year.  I appreciate both teams for making this experience possible.”


About Team Ohio Racing’s / Veterans Empowered Through Motorsports: Team Ohio Racing is the first motorsports team to fully integrate disabled veterans into an active race team environment.  By working with the Wounded Warrior Project, local alumni-warriors are incorporated into their AMA Pro Racing Vance & Hines XR1200 team.  Team Ohio Racing delivers respect to the WWP mission by working with WWP-Alumni members, allowing them to focus on their abilities instead of disabilities, and to heal and empower through motorsports. 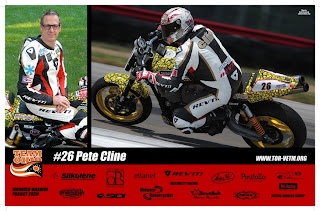