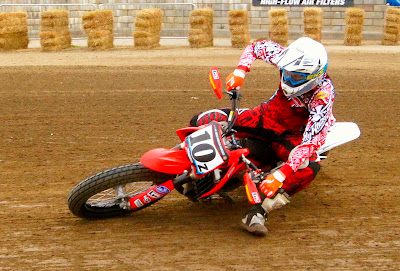 Briar Bauman on the #10Z Rod Lake Racing/Russo Construction/Browns Cycle/Arai-sponsored Honda CRF450R during final qualifying at round 12 of the 2012 AMA Pro Flat Track Grand National Championship at the Springfield Short Track on September 15, good enough for 5th-fastest on the night out of the 48 riders who took a timed qualifying lap.

Bauman would go on to his best finish of the season later in the evening (4th-place) and just missing the podium by .135 seconds.  He would finish the season ranked as the 12th-place rider in the overall standings and capture the 2012 AMA Pro Flat Track Saddlemen Rookie of the Year Award at the season-ending banquet ceremonies held in Pomona.

After being one of the most-traveled riders in his freshman campaign in The Rolling Thunder Show (riding Kawasakis, Hondas and Suzukis), Double B announced over the off-season that he was signing to ride for the Yamaha-backed Babe DeMay Memphis Shades team.

The team made it's debut at rounds one and two of the 2013 AMA Pro Flat Track presented by J&P Cycles Grand National Championship season at the Daytona Short Track last week, and had a rough go of it for Bauman's start to his sophomore season.  But you can be sure that not only will last year's Rookie of the Year turn it around, so will the team headed-up by one of the long-standing and hardest working tuners in the business.

You can check out their press release below, and be sure to keep an eye on the new team when they head to the next round of the series at the Stockton Half-Mile in May!


Rossville, TN. -- March 20, 2013 -- On the white limestone track just outside of turn 1 at the world famous Daytona International Speedway, fortunes can be made or broken in the blink of an eye.  A track surface that changes quicker than any other that riders see during the entire AMA Pro Flat Track Presented by J&P Cycles series gives riders a challenge throughout the day.
Team mechanic Clayton Shambaugh worked into the very early morning hours to get Briar’s Yamaha YZF450’s ready to do battle once again.  Briar suited up to take on the “un-timed” practice session and using a similar set up to what he had on Thursday night, finished a very strong and respectable 8th place, just a quarter of a second off of the pole sitter’s time.   In the first qualifying session Briar was even stronger, finishing 6th overall, and now just 0.140 seconds off of the pole time! “The bike felt great," said Briar.  “All of my laps were consistent and I knew right away that our set up was good for the day.”
As qualifying goes on in Daytona, the track gets much faster, and in the last session, which is where the best times will come from, Briar slipped just a bit to the 10th starting spot, but still good enough for a front row starting spot in the heat race.   Briar lined up in heat number 1 and unlike the previous night, rocketed off the line and battled with very seasoned Daytona veteran’s Brad Baker, Bryan Smith and last year’s winner, Johnny Lewis to secure the 3rd spot at the checker, sending him straight into the main event without having to ride a Semi Final race.
After the race Briar explained, “I was so excited to be right there, you know? Right with the best guys.  I knew we had the speed, I just needed to put it all together for the main event”
In the main event, the fortunes would turn against Briar, as he was shuffled to the outside of the track where there is no traction at all.  It took several laps for Briar to get back down on the tiny groove that had developed on the quarter mile short track and by then, the field had spread out.  Once back on the racing line, Briar picked up his lap times and was running similar times to the leaders, but it was too little too late.
Ending the Daytona trip with a DNF one night and a 14th place finish on the other is obviously not where Briar or the team want to be or what they are capable of.  “It was a tough week,” Briar explained.  “We had a great day of testing, both days at the track the bike was excellent, but I just had some slip ups out there racing, things I can learn from though.  I can’t wait to get back home, out West, and ride the new Yamaha twins on some familiar dirt!”
The series next moves on to the West Coast on May 11th at the brand new Stockton Half-Mile where the new Babe DeMay tuned Yamaha twin cylindered machine will make its racing debut.  This is a home town race for Briar too, as he is based just 2 hours from the event.
Along with Yamaha Motor Company and Memphis Shades, Babe DeMay Racing would like to thank the following sponsors who have come on board to make the 2013 season possible:

Briar Bauman would like to thank the following personal sponsors for their support during the 2013 season: