AMA Pro Flat Track: Stockton Half-Mile Now Scheduled for Round 3 on May 11

Eventual 2012 AMA Grand National Champion Jared Mees on the #9 Rogers Racing/Blue Springs H-D/Saddlemen/National Cycle-sponsored Harley-Davison XR750 runs ahead of Johnny Lewis on the #10 Scott Powersports/Saddlemen/Wallace Trucking/AXO-backed Kawasaki 650R-based parallel twin as they come out of turn two onto the back straight at the annual event known as the Lima Half-Mile.

Mees again will be on the Rogers Racing team, after switching things up with his crew chief during the off-season.  Gone is long-time wrench Brent Armbruster (now residing with the Lloyd Brothers Motorsports/Henry Wiles effort for 2013) and in is Kenny Tolbert, the multi-time championship-winning tuner most notably recognized for his many years spent with 7-time AMA Grand National Champion Chris Carr.

Lewis returned to the series at Daytona, and for the upcoming Twins Series events of the 2013 season will now be a part of the new Latus Motors Racing Triumph squad that was announced earlier this month.   Needless to say, the greatest racing series on two wheels in the world is gearing up for another incredible year of racing.

AMA Pro Flat Track announced officially yesterday that what was one of the 'TBA' events on the original schedule for early May has now been dropped, and the Stockton Half-Mile on May 11 will now be the next event on the calendar.  That leaves 43 days for fans to get their schedules set to see the next round of the season and to get the adrenaline flowing after the season-openers at Daytona on March 14-15.

Check out the official press release below from AMA Pro Flat Track, get your calendars set and your tickets bought so you can catch The Rolling Thunder Show as it flies into the Stockton Half-Mile to get the rest of the season kick-started for another great year of racing!

Stockton Half-Mile to Host Third Round of AMA Pro Flat Track presented by J&P Cycles Action on May 11, 2013


DAYTONA BEACH, Fla. (March 28, 2013) - Next stop, Stockton, California. The stars of AMA Pro Flat Track presented by J&P Cycles intend to pack up their machines and head out west for the first time this season and go handlebar-to-handlebar at the San Joaquin County Fairgrounds in Stockton, Calif.  Despite the best efforts of all involved, the TBA event previously scheduled for May 4, 2013 will not be conducted.  Nevertheless, fans can write this upcoming Stockton event in permanent ink on their calendars, as the race is expected to bring nonstop action-packed racing from the very first heat all the way to the drop of the checkered flag in the final main event. 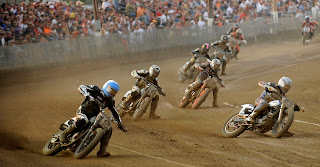 Brad Baker #12, Jared Mees #9, Jethro Halbert #69 and Luke Gough #62 battle at the front of the pack during heat race three at round 5 of the 2012 AMA Pro Flat Track Grand National Championship season, at the Lima Half-Mile on June 30.  The 2013 AMA Pro Flat Track presented by J&P Cycles Grand National Championship season will head to the Stockton Half-Mile on May 11 in what will now be round three for The Rolling Thunder Show.  AMA Pro Flat Track photo by Dave Hoenig.
"I'm thrilled to bring our series out to California for the first time this season," said Michael Gentry, COO of AMA Pro Racing.  "It seems like every time our riders compete in the Golden State it's always a world-class experience.  The fans embrace the sport and the atmosphere is just unbelievable.  The field is very competitive this year as we all witnessed in Daytona and we can't wait to get everything started back up again in May."
The AMA Pro Grand National Championship Expert riders will be mounted on their thundering twin-engines for the first time this season on San Joaquin County Fairgrounds' half-mile course.  Mikey Rush and Brandon Robinson were able to come out on top and stake their claim on Daytona's short track in the 2013 season's opening rounds.  The rest of the field will be ready to turn up the pressure to on the half-mile course when the Series heads West.
As for the AMA Pro J&P Cycles Pro Singles, they will be piloting their single-engine machines for the third time this season.  Michigan's Kyle Johnson and New Yorker Jake Constantine both took checkered flags at Daytona and will look to have similar success when the lights go on in Stockton.
Both divisions in AMA Pro Flat Track presented by J&P Cycles look to be of extreme potency in 2013.  The AMA Pro Grand National Championship Experts bring back a deep field of proven veterans as well as talented young and win-hungry stars that are looking to make a name for themselves among the elite on the biggest stage in the sport.  The AMA Pro J&P Cycles Pro Singles also make up a field of young and fierce competitors looking to make an immediate impact in hopes of obtaining a championship.
For more information, please visit http://www.stockton99.com/.