Justin Reed on the #53L Rich King Racing KTM 450 SX-F appears to have a slight lead from the start, going on to finish in 3rd-place to round out the podium.  First-time series winner Dominic Colindres on the #66Y Weirbach Racing Honda CRF450R hugs the inside line in route to taking over the lead to take his first-ever win in the series while in his first ride for the team.

Jason Isennock on the #30S Highs Dairy Stores Honda (7th-place finish) holds it tight on the outside of Colindres, while Rodney Spencer, Jr. on the #74Z 831 Pinnit Honda (4th-place) looks to have the advantage on Nick Mataya on the #12L Shoe Racing Honda (5th-place), with Kurtis Lee on the #78J TCR Honda (14th-place) appearing to have lost his edge on the outside as the pack bunches up.

Coming on strong in the back are Jake Shoemaker on the #55A Montgomeryville Cycle Center Honda (6th-place), Dan Bromley on the #54A Bob Weirbach Race Team Honda (17th-place), and eventual 2012 AMA Pro Singles Champion Steven Vanderkuur just coming into the shot on the #10J Parkinson Brothers Racing Honda (2nd-place) as they lead the rest of the 18-rider main on a 12-lap romp in the hallowed halls of Peoria.

In it's fourth season of competition, the AMA Pro Singles Championship has turned out some spectacular talent from what is the 'feeder' series of the AMA Pro Flat Track Grand National Championship.  All of the series' first three champions (Brad Baker '09, Jeffrey Carver, Jr. '10, Mikey Martin '11) are now racing in the big show of The Rolling Thunder Show, and providing some serious competition for their fellow Expert-ranked riders in what is arguably the best racing series on two wheels in the world.

The 2013 AMA Pro J&P Cycles Pro Singles Championship season got off to another roaring start at Daytona last week, and saw two new winners in each of the two opening rounds held at the Daytona International Speedway.  And the field of talent is just as deep, if not deeper, for what is the series' fifth-full season of competition.  And the big question now is, who will try to take the crown away from Vanderkuur, or will the series see it's first two-time champion when the season wraps up in Pomona many months from now?

Read on below to see AMA Pro Flat Track's review of the season-openers and see if any of the possible future Grand National Champions finished up at the top where you may have expected them to....or not!

DAYTONA BEACH, Fla (March 22, 2013) - Michigan's Kyle Johnson (Boughner Racing / Muskegon Motorcycle Gang) got off the line first in the 16 lap AMA Pro J&P Cycles Pro Singles first round main event at the DAYTONA Flat Track on March 14, 2013. However, Johnson was quickly passed by a charging Maryland product in Mike Poe (Jason Isennock / CCBC / Blevins).
Johnson stayed glued to Poe as he became the meat in a Maryland sandwich, with Jason Isennock, also a native of the "Old Line State," (Highs Dairy Stores / Foard Racing) right on their heels.  On lap eleven, Johnson was able to capitalize on a mistake by Poe to recapture the lead. Once obtaining the top spot, Johnson built his lead and clinched his first ever professional victory.
"I was just being patient and waiting for him to make a mistake," Johnson said. "Once I got up on the inside of the leader I got a good drive and took him on the straight away. I couldn't be more satisfied with the way I performed tonight. My bike was unbelievable and everything really came together when it mattered most. I reclaimed the lead late in the race and that was all I needed to close it out." 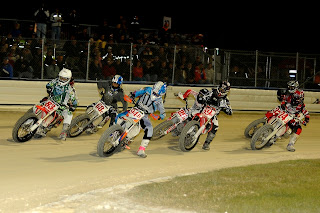 Ryan Wells on the #94B Waters Auto Body Honda appears to have the inside line ahead of Shayna Texter on the #25A Crosley Radio Honda during racing action at rounds 1 & 2 of the 2013 AMA Pro J&P Cycles Pro Singles Championship season at the Daytona Short Track last week.  The close, fast racing in the 'feeder' series for the AMA Pro Flat Track presented by J&P Cycles Grand National Championship saw two first-time winners at Daytona in Kyle Johnson and Jake Constantine and lays the groundwork for what will surely be another great season of racing for the future stars of the sport.  AMA Pro Flat Track photo by Dave Hoenig.
Final results 1-10: 1st - Kyle Johnson, 2nd - Jason Isennock, 3rd - Mike Poe, 4th - Brandon Wilhelm, 5th - Rodney Spencer Jr., 6th - Ryan Wells, 7th - Hunter Taylor, 8th - Dan Bromley, 9th - Jake Constantine, 10th - Wyatt Maguire
AMA Pro J&P Cycles Pro Singles - Round 2
Jake Constantine stormed around the outside of fellow New Yorker Ryan Wells at the start of the 16 lap AMA Pro J&P Cycles Pro Singles main event and rode to a convincing second round win on his Allphase Masonry & Chimney / Matt's Cycle Center backed Honda. Wells tried to stay close, but the lead grew to over one second by the halfway point and over two seconds by the end of the race.
"I can't even explain how I feel right now," said an ecstatic Constantine. "To come down here and win it all is the best feeling in the world. It feels great to be on this podium, let alone be at the top of it! This win was huge for me and my team because of how bad we struggled last night in the opener. I can't thank everyone enough for helping me out; this feeling is so surreal right now."
Wells maintained a solid second place position throughout the race, while Thursday night's third place finisher, Mike Poe, worked his way forward taking third place yet again after passing Wyatt Maguire (Kirkland Racing / Pro1racingheads.com) on lap 12.
There is a log jam at the top of the AMA Pro J&P Cycles Pro Singles point standings. Jake Constantine holds a single point lead over Mike Poe with Kyle Johnson and Ryan Wells another point back. Jason Isennock remains in fifth, seven points off the lead.