Yamaha AMA Motorcycle Hall of Fame Breakfast at Daytona, presented by Motul, succeeds thanks to supporters

PICKERINGTON, Ohio -- March 21, 2013 -- The AMA Motorcycle Hall of Fame thanks its supporters, sponsors and "Mr. Daytona" himself, Scott Russell, for helping make the 25th Annual Yamaha AMA Motorcycle Hall of Fame Breakfast at Daytona, presented by Motul, a successful fundraising event. Russell, who has won the Daytona 200 five times, was the featured speaker at the event.

"The history of American motorcycling is rich with great stories and fascinating moments, and Scott Russell has contributed more than his fair share to that heritage," said Jeffrey V. Heininger, chairman of the American Motorcycle Heritage Foundation, which directs the AMA Motorcycle Hall of Fame. "We thank Scott for sharing his stories with us, and we thank the hundreds of supporters who helped make the 25th anniversary of this great event a success."

"For whatever reason, and I don't know why, every time, I just knew I was going to win the Daytona 200 when I turned off the interstate onto U.S. 92 in Daytona on race weekend," said Russell, who was interviewed by Ben Cheatwood at the event. "There's just something about this place that always clicked for me." 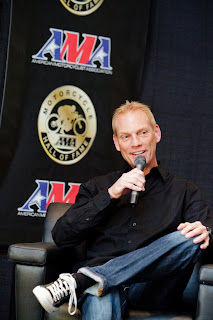 
The breakfast kicked off with an introduction by Bob Starr, general manager, motorsports communications, of Yamaha Motor Corp., U.S.

"All of us at Yamaha were truly honored to be part of the AMA Breakfast this past week recognizing the tremendous career and achievements of Yamaha Daytona champion, 'Mr. Daytona,' Scott Russell," Starr said. "As I said during his introduction, we are, indeed, proud to have Scott as a lifelong member of the Yamaha family of legendary champions and couldn't be more pleased that he continues to give back to the sport that we all love!"

Motul Lubricants, one of Russell's longtime sponsors, was the presenting sponsor for the event.

"The breakfast was a fantastic opportunity to support the AMA Motorcycle Hall of Fame and to honor a living legend and old friend," said Motul President Dave Wolman. "Scott's humorous and down-to-earth personality made the interview and event a huge success for all attendees. Bob Starr's intro and Ben Cheatwood's interview were perfect. The question-and-answer session with the audience was great, and the autograph session topped off the morning. These events for us who have been involved in motorcycling for decades are unique, reminiscing on past memories, preserving them, while making new ones at the same time. Outstanding!"

To view a gallery of photos from the Yamaha AMA Motorcycle Hall of Fame Breakfast at Daytona, presented by Motul, see www.motorcyclemuseum.org.