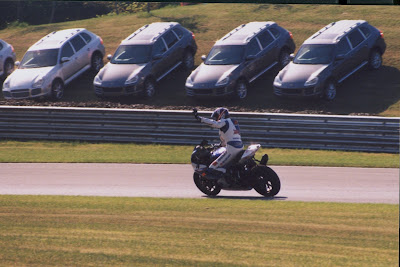 As Mat waves to the crowd after having won the 2nd of both w/e races
at Barber Motorsports Park back April of '07 in the REAL AMA Superbike
Series, news this week is that he has started his own blog here on Blogspot.
After having announced several weeks back that he is now on Twitter--see post
below--Mat this week announced his intentions to keep us up to date on his new
blog, as well. If you would like to follow Mad Mat this year, check out the link and
hang on for a fast and furious ride as he rips through the ranks of the NOW AMA
American Superbike Series--think Superbike-Lite compared to what we have been
used to here in the good ole U.S. of A. Nonetheless, Mr. Mladin is spanking the competition
on the DE-tuned bikes just as he has done so for the better part of the last 12 or 13 years,
now having amassed a total of 7 wins this year aboard the '08 and now '09 model GSXR-1000
Suzuki. The competition has a long year ahead of it. Read on and right on!