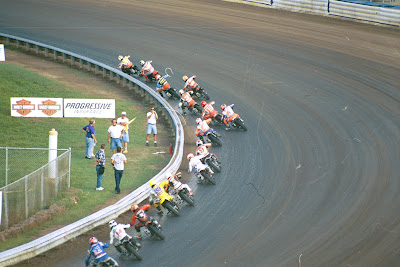 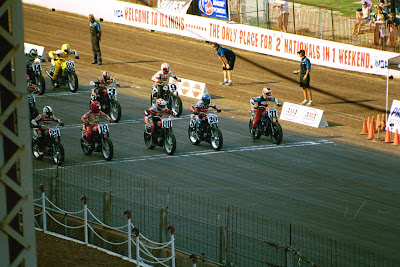 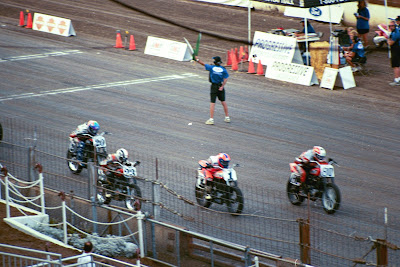 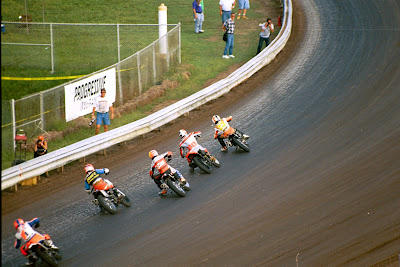 This afternoon The Illinois State Fairgrounds will host what
is and has been for decades the finest two wheel show on dirt. Starting
with the Springfield TT today at the rodeo/multi-purpose stadium, the 450-class bikes will take on the hand-made TT track, and move tomorrow to the mile fairgrounds track several hundred yards away for the big twins class and The Infamous Springfield Mile Memorial Day W/E Classic.
Riders such as 7-time Grand National Flat Track Champ #1 Chris Carr, #23 Kevin Atherton, winner of over 15 GN races in his over 20 year career, #3 and former GN Champ Joe Kopp, #14 and former Singles Grand National Champ Jake Johnson, and a host of others will thrill the crowds--and some of the other riders--with their prowess not only on the TT course today, but especially with their skill to handle a 320 Lb. flat track motorcycle at close to 140
mph on the straightaways on the mile dirt track.
What has become not only an institution, but a must-see race in any bike racing fans' eyes, the w/e should prove to be very exciting especially if Mother Nature cooperates. And if you can't make it to the races which are located some 195 miles west/southwest of Indianapolis, then you can follow the action via the links below thanks to the wonderful folks at http://www.amaproracing.com/ . The 3rd link will have the live timing as provided by the AMA so you can keep up, and in case you aren't sure where to go, I have provided a link to the Illinois State Fairgrounds as well:
http://www.amaproracing.com/ft/events/event.cfm?eid=2009020920
http://www.amaproracing.com/ft/events/event.cfm?eid=2009020921
http://wire.ama-cycle.org/
http://www.agr.state.il.us/spacerental/map.html
Thanks to not only AMA Pro Racing, but to the Illinois State Fairgrounds for the
super links to all of the w/e action. Guaranteed fun and if you have never seen
a mile flat track motorcycle race, then your time is now. But if you already have
plans as most of us do by now, you can set your calendar for the Labor Day W/E races, as well, to see the short track as well as the mile race.
The shots above you are viewing are a smattering of pics I took at the '04 Labor Day W/E Classic. Riders such as aforementioned 7-time Champ, #1 Chris Carr, #23 Kevin Atherton, #14 Jake Johnson, #3 Joe Kopp, as well as #9, 3-Time Grand National Champion and perenial crowd and fan favorite Jay Springsteen, can be seen ready to go and in action on the mile during the main event.
Also in these shots you will see #89 Kevin Varnes, #18 Terry Poovey, #80 Rich King, #31 and NOW #1 and 3-Time Grand National Champ Kenny Coolbeth, and former and now semi-retired as last I heard #20 Johnny Murphree all doing battle at 140 on the straights and close to 95 mph diving into the turns.
Springfield is always a magical time, I myself went there my first year in '86 when The King, Kenny Roberts, came back to the dirt tracks after a 7 or 8 year abscense while winning 3 World Championships in 500 GP from 78-80 to try and put a Harley in the field for what at the time seem like a dream after all of his years aboard Yamahas. Unfortunately, he didn't make the field but it wasn't for lack of trying as the field was 'littered' with now retired greats Bubba Shobert, Jimmy Filice and even Wayne Rainey. Not too mention the dearly departed Ricky Graham, former 3-Time Grand National Champion. I've only missed 5 or 6 of the Labor Day Classics since that time after returning nearly every year since '91, and always leave shaking my head and thinking for hours---WOW---WHAT A SHOW!!
Believe me, an old pro at following GREAT motorcycle racing for over 3 1/2 decades, it DOESN'T get any better then this and you better forget that you bought a ticket for a seat because you will be on your feet for 3/4 of the time anyway.
Just a nod to Mike Kidd, the former '81 AMA Grand National Flat Track Champion, who when I started following the sport in the summer of '74 was laid up with injuries that he suffered earlier that year while riding for the Triumph Factory Team, and who also won races and helped Team Honda develop the RS750's that came along in the early '80s to defeat the long-running stand of Harley dominance. Mr. Kidd, who I saw win the Terre Haute, IN. Half Mile Race in '76, is now the man on the point for the new DMG-led AMA Pro Racing Flat Track series. With this w/e being the 3rd and 4th events of the '09 calendar, we could also be seeing history made as he tries to help turn around the declining attendance, the slow decline of new riders into the sport, and the
general problems of what tracks are proper tracks to race at. He will have his hands full this year trying to find a course of action and hope for the series, and with the help of the IMDA---the Illinois Motorcycle Dealers Assoc., who also run the Peoria TT in August, and by following their lead in putting on a class show, he would be the man to do it. I and many others wish him luck and realize the future of Grand National Flat Track Motorcycle Racing is in his hands!
Go enjoy your weekend, and mark Sun., June 14, 2009 on your caledar as well because at 4 P.M. ET, SpeedTV will be showing tape-delayed coverage of the weekend.
And last but definitely not least, remember to honor and pray for the men and women of our armed forces that gave their lives in battle for this wonderful country so we would still be allowed to do what we have always been able to do as a free country and to be able to attend the many, many different types of events that we do over the years, decades, and eras. God Bless Our U.S. Forces for what they have done and will do to protect us!!
Posted by Stuman714 in Indy at 10:33 AM