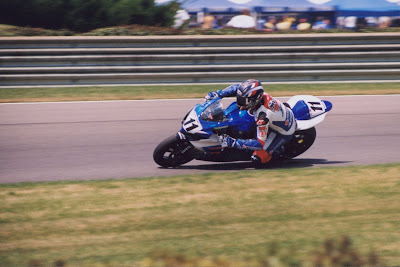 While we see Ben Spies bend it into turn 11 at Barber Motorsports Park
during qualifying for the old AMA SuperStock class in April of '07, word comes
from across the pond that young Mr. Spies has claimed his 5th SuperPole of the year
in the World Superbike Series in Monza, Italy.
Being a 'rookie' racing in Europe this year, Elbowz Spies has now amassed 5 Superpole wins, 4 wins, 1 second, and also, unfortunately, 3 crashes. The 3 crashes, with ZERO points each for those three races, mean that Mr. Spies comes into the 5th round of the year 60 points in arears
of one Nori Haga on the Team Xerox Ducati in the fight for the '09 World Superbike Series
Championship. However, with the 2 races for tomorrow, and the other 9 events and 18 races
to go in the season, anything can happen. And Nitro Nori in this young season has made ZERO
mistakes so far, having captured 2nd place to Mr. Spies 4 wins.
You can keep your fingers crossed and watch the tape-delayed races tomorrow on Speed TV, or
even catch the live timing during the races 'live' on your computer. The races roll off at 0600 and 0930 ET in the morning, and will be shown 16-1800 ET on Speed, or the night owl times of
0300-0500 on Wed. 5/13 on the same. You can also follow along with the
updates from the website on the left side column, or click here: