Ben Spies Runs Out of Fuel and Wins 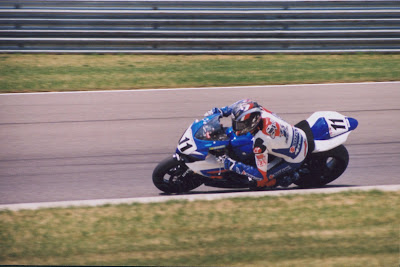 Although, just not in the same race outing.

After winning his 5th SuperPole of the season in WSBK competition at Monza,
Mr. Elbowz suited up for the racing end of things at the Italian circuit. After leading
the majority of the race, his Yamaha R-1 ran out of fuel in the last set of turns onto the
final run relagating him to a 15th placing, and 1-point outing for the day in the championship
hunt. Later in the 2nd race of the day, Ben pulled off another win, while his main competition
for the title, Nitro Nori Haga, binned it early in the race to card ZERO points for the race. While
taking home a 2nd place in race 1, Nitro managed to give up a few points to Ben to make the
championship a now 54 point differential going in to next weekend's race at the South African
round of the World SuperBike Series.

You can view all results straight from the official site here:

The shot above is Mr. Spies in SuperStock-class qualifying mode at Barber Motorsports Park
in Alabama during the April '07 round of the good OLD AMA Superbike Series.
Posted by Stuman714 in Indy at 12:31 PM