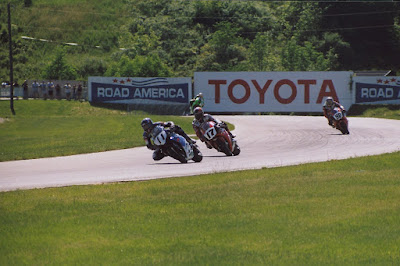 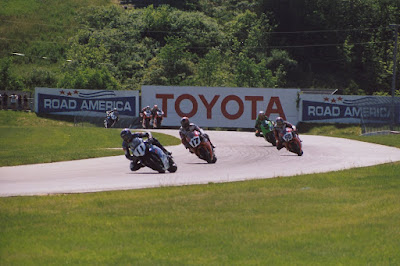 For a guy that is supposed to be a 'rookie' in a new series for him, that in
most cases other then this w/e he hasn't even seen the majority of the tracks
he is riding on, Ben Spies is setting the world, let alone the World Superbike Series,
on fire.
Having broken a 17 year old record yesterday in winning 7 SuperPoles in a row, a previous
record held by another Texan and former AMA Superbike Champion as well, Ben stole the
record that was held by Doug Polen when he contested the World Superbike Series in the early
'90s, while winning the championship in '91 and '92 on the Fast by Ferracci Ducati. Yes, for a man that came into a new series this year, on a new team, and on a new and advanced Yamaha R1 motorcycle, Ben is doing his best to show everyone that he is no rookie, and be damned the
hype that you can't win or compete in WSBK on tracks you haven't seen or ridden on previously.
And just to add insult to injury to anyone else who had any doubts, he took this new record yesterday on a track that for once, he had ridden on, let alone seen. And did it while the clouds
were getting ready to open up and shower the track at Miller Motorsports Park in Tooele, Utah.
And to have broken a record that had stood for 17 years in the now 22 year old series is in itself
quite an accomplishment. Not bad for a 'rookie.'
Both races today at the beautiful MMP in Utah will be a challenge for all entered, and Ben will still have to come out ahead of rival Nitro Nori Haga in order to get back into the championship hunt after a couple of crashes and DNF's due to lack of fuel load and shifter-related problems--both of which occurred as he was either about to win or in the process of leading races. Nitro Nori did suffer a massive get-off yesterday during practice, so he is likely to be a rightfully-so sore today after pounding the MMP pavement from this big highside as made available by the wonderful folks at http://www.superbikeplanet.com/:

Nonetheless, Nitro may be sore but Ben 'Elbowz' Spies, or The Texas Terror should you have it, will still have his hands full with a field of major stars. Both races will be run today @ 2 P.M. and 5:30 P.M. EDT, and both will be shown tape-delayed on SpeedTV today at 5-7 P.M. EDT as well. And if you are like me, you can follow them both on the net courtesy of the fine folks at the Official World Superbike site here via this link. The live timing is on the right side of the page and pretty easy to spot about 1/3 of the way down:

You can also check out Miller Motorsports Park's website here:

Finally, the shots above were taken at Road America of Ben leading a various cast of U.S.-based stars from the AMA Superbike Series in June '06 in what was race 2 on Sunday afternoon of the 'old' REAL Superbike Series. On the Team Honda CBR1000RR mounted #17 Miguel Duhamel and #98 Jake Zemke, #22 Tommy Hayden on the ZX-based Team Kawasaki, team mates on the Ducati-factory efforts #100 Neil Hodgson--also a former World Superbike Champion--as well as Ben Bostrom on the #155 and also not only a former multi-time winner on the WSBK scene, but the winner of the '98 AMA Superbike Series, the '08 AMA SuperSport Champion, and this years winner of the AMA Daytona 200. Also to be seen in pic #2 is perennial crowd/fan favorite Aaron 'Yikes' Yates on the Team Yoshimura GSXR-1000, at the time Ben Spies' team mate along with multi-time champ Mat Mladin.

Enjoy the races this weekend, and have a good week. Thanks for coming by to share in the fun
and the speed and the rush that is Stu's Shots R Us! God Bless!
Posted by Stuman714 in Indy at 10:24 AM