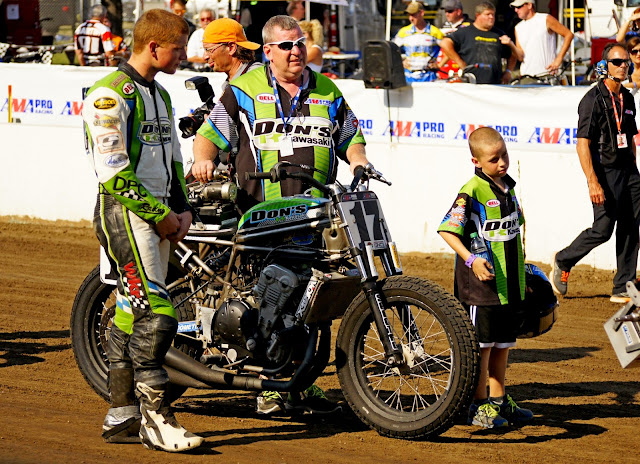 In another sponsorship announcement this last week from AMA Pro Flat Track, Saddlemen will be returning as the 'Rookie of the Year' headline sponsor for the series in what will be it's seventh consecutive season. Saddlemen, the makers of the finest seats in racing and for private/street use, will again be putting up a bonus award of $5K to the winner of this year's award.

In the shot above, 2015 Saddlemen Rookie of the Year Jarod Vanderkooi, his father Jerry and younger brother Jake get the #17F Don's Kawasaki/DPC Racing/Floyd Tapp-sponsored Kawasaki EX650-based mount up to the line during the rider intros portion of round 11 of the 2015 AMA Pro Flat Track Grand National Championship Harley-Davidson GNC1 presented by Vance & Hines series at the Springfield Mile II on September 6.

Vanderkooi finished in the 12th-place spot in the overall standings during the 2015 season, amassing two top-5 finishes (Charlotte, Delaware/both 5th-place finishes) and two more top-10s (Du Quoin/7th-place, SF Mile II/8th-place) to take home the $5K bonus for the season. He will be wearing Grand National #20 in the upcoming season on his Don's Kawasaki Racing mounts.

Saddlemen has awarded the 'Rookie of the Year' to PJ Jacobsen, Brad Baker, Briar Bauman, Jake Shoemaker and Wyatt Maguire along with Vanderkooi for the last six seasons in the AMA Pro Flat Track Grand National Championship. Jacobsen has since gone on to compete in the World Supersport series, while the rest are still strong front runners in The Rolling Thunder Show, with Baker going on to earn the 2013 Grand National Championship.

Riders including Bronson Bauman, Brandon Wilhelm and 2015 AMA Pro Flat Track GNC2 Champion Davis Fisher will be among a large class of riders moving into the GNC1 class for the 2016 season that will be eligible and competing for the ultra-competitive 'Rookie of the Year' Award.

Check out the full press release below thanks to AMA Pro Flat Track as we all get ready for the season ahead to commence in just 12 short days at the Daytona Short Track on Thursday, March 10.